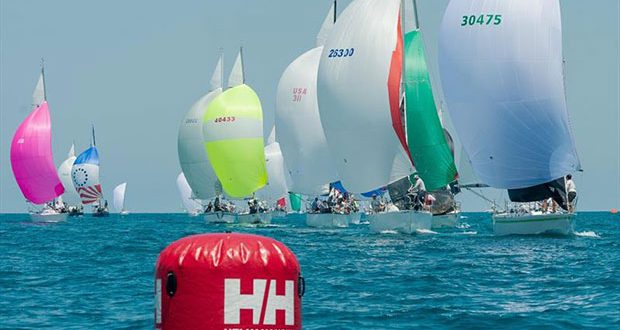 World-champion sailor Andy Horton, who is competing in this weekend’s Helly Hansen NOOD Regatta Chicago, said that no one on their Great Lakes 52 team believed the forecasted afternoon thunderstorm would materialize but when it did, he agreed ending racing early for the day was the right call.

“I told the Fox team that the windiest place I have ever been was during a storm in Chicago and it blew 76 knots,” he says. “Anything can happen here and do not underestimate this lake.”

All competitors completed two races before being sent to safe harbor before the worst of the storm passed.

Horton is tactician for Victor Wild’s Fox, a Botin 52. Fox is the newest of the seven-boat GL 52 fleet and after five races, it leads by one point over Doug DeVos’ Windquest. The class uses the ORC rating system, which levels the playing field across the multi-generations of boats. “Basically, we need to beat the other competitors by varying time differentials,” says Horton. “Which means you better sail the boat well in order to finish on top.”

Local sailor Martin Johnsson’s J/70 Aquaholiks, a Corinthian (all-amateur) team, is currently leading the nine-boat class, finishing in first or second places today. “Our first race today began in light-air conditions similar to yesterday,” Johnsson says. “However, by the end of the second race, the J/70 planes downwind at around 13 knots, and we were definitely doing that, right as the storm started building over the city.”

Johnsson, a previous J/70 class and overall Chicago NOOD winner, believes the key to their strong finishes today was staying on top of adjusting the boat and rig tune as the wind increased throughout today’s two races. “Unlike yesterday where the focus was on just going fast, today we had to really work the boat to stay on your game.” 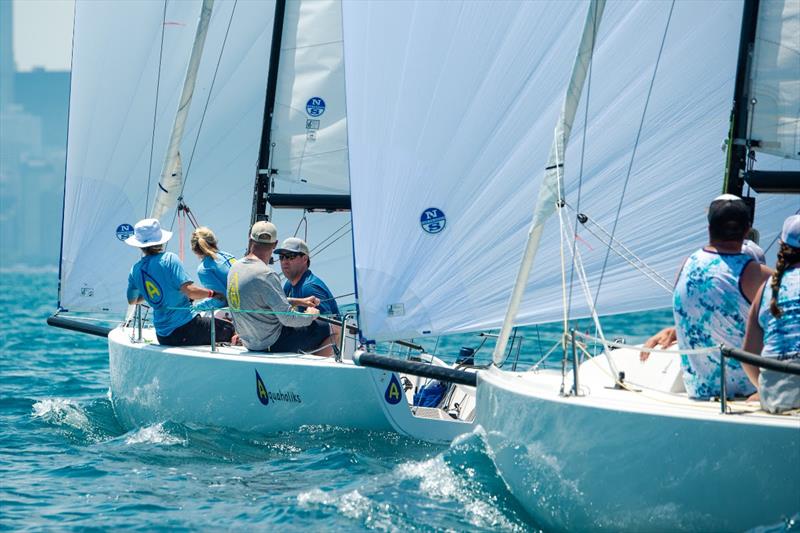 In the Tartan 10 class, the top-spot battle is shaping up between yesterday’s leader Meat, today’s winner Erica, and third-placed Winnebago. Erica’s owner and helmsman, Brian Kaczor, says getting decent starts is what helped them earn the lead today. “I made it very tough on the team yesterday with my horrible starts,” Kaczor says. “Today I finally began starting better, and from there we have the boat speed to do well.”

“We were definitely keeping an eye out for Meat and Winnebago,” he says. “The key tomorrow is me starting the boat well, and then the crew can just do their thing. We’ve sailed together for four years, which makes it very easy for me to just steer and trust that everyone does their thing.”

Special additions to the Saturday race schedule include the Cruising World Rally Distance Race, in which 28 cruising and racing boats sailed a course ranging from 10 to 15 miles, and a remote-control sailboat race during the Sailing World Happy Hour at the Chicago Yacht Club.

Len Siegal’s Lucky Dubie won the Rally’s ORC Division on his boat’s debut. A longtime competitive sailor in Chicago and owner of three previous Lucky Dubie-named boats, Siegal is transitioning over to the cruising / racing side of sailing and purchased the used 40-foot J/122 to do distance races and Great Lakes cruising. “Heck, we even have an oven on board the boat now,” he joked.

“I’m not used to doing straight-line distance sailing after doing buoy races for so many years,” he says. “But I’m thrilled with the boat and how we sailed. I’m with a new crew, and other than us trying to figure out where things were on the new boat, it felt great. I’m grateful to be out on the water after the last year of the pandemic, and we had a really fun race.”

To close out the second day of the Chicago NOOD, sailors and spectators attending the Sailing World happy hour enjoyed the mayhem of 21 DragonForce 65 remote-controlled sailboats bobbing and weaving on a miniature race course just in front of the Chicago Yacht Club.

Tomorrow after the final day of racing, one class-winning competitor will be chosen to compete in the Helly Hansen NOOD Caribbean Championship in October in the British Virgin Islands.