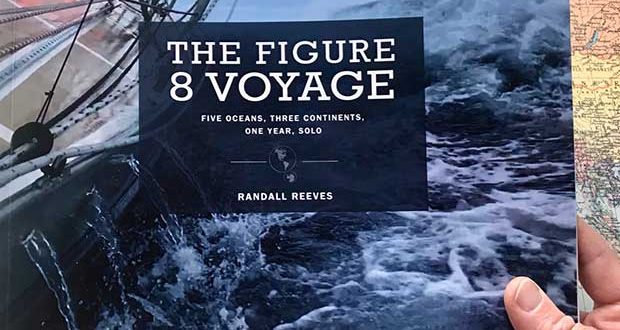 Posted by: YachtBoatNews in Sailing & Yachting, Travel Destination 11/04/2021 Comments Off on Interview with Randall Reeves 72 Views

For most singlehanded blue-water cruising sailors, crossing the Atlantic or sailing alone to Hawaii would be an adventure of a lifetime.

Not so for Randall Reeves (57; USA), a Bay Area resident and the first person to sail solo and non-stop around the Americas, which he passed to port, and Antarctica, which he passed to starboard, before returning home. All told, his “Figure 8 Voyage”, which began and ended on San Francisco Bay, and which he completed on October 19, 2019, involved 39,000 blue-water miles, which he racked up in 385 days aboard Moli—AKA Mo—his 45-foot aluminum cutter.

Even more impressive is the fact that he had to depart from San Francisco twice in order to realize his dream.

Reeves first Figure 8 attempt (2017) ended after he and Mo suffered numerous knock downs and damage in the Indian Ocean and huge seas in the Pacific that shattered a pilothouse window and destroyed his electronics. While he was forced to return to San Francisco to refit and repair Mo, he headed back out to sea just three months later.

His second Figure 8 attempt began in September of 2018.

A staggering 385 days later, Reeves and Mo returned to San Francisco Bay having completed one of history’s most impressive singlehanded blue-water passages. His bold efforts earned him the Cruising Club of America’s coveted Blue Water Medal, which is the club’s highest accolade.

Interestingly, Reeves’ Figure 8 Voyage wasn’t the first time that Moli (nee Taonui and Asma) earned her skipper the CCA’s highest honor. In 2002, when she was called Taonui, she and her previous owner, Tony Gooch, earned The Blue Water Medal for sailing non-stop and singlehanded around the world from North America.

I checked in with Reeves, via email, to learn more about his impressive high-latitude cruise. 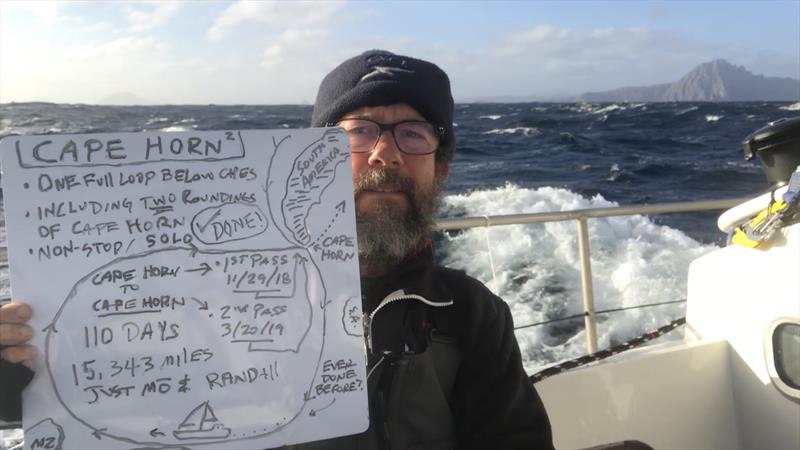 How did you become interested in long-distance solo cruising?

My family bought its first sailboat when I was in high school, a 30-foot plastic classic. I learned to sail on the rivers of central California; even back then I was most fond of solo sailing.

Partly this was selfishness: I like doing everything myself. I used to “borrow” that boat for solo jaunts when dad was away on business trips. Dad was a retired Merchant skipper; deep-sea stories were a part of the family lore, so, wanting to get [out] to sea myself was always a passion.

Then in the mid 1980s I met Bernard Moitessier. [I] interviewed him for my college radio station. That meeting, plus [reading] his books, sealed the deal for me. I wanted to go to sea, but alone. 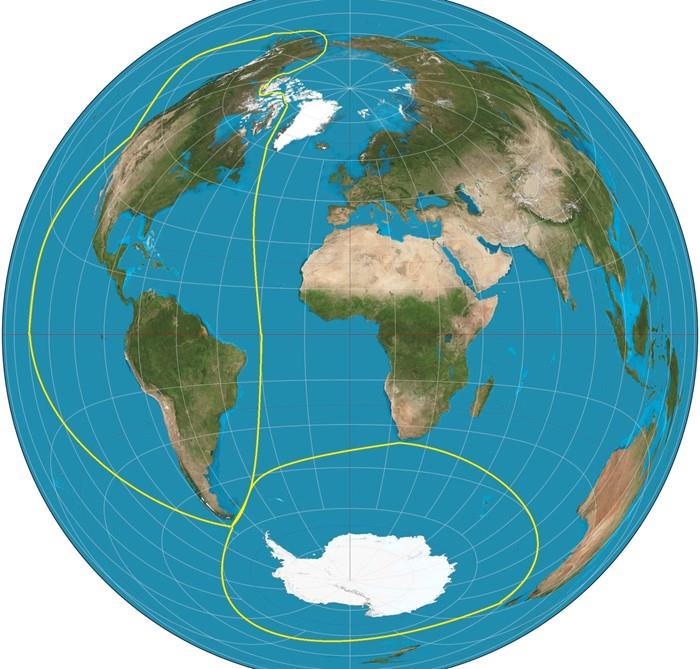 Can you tell us a bit about the cruises that you made ahead of your circumnavigation of the Americas and Antarctica? Also, how did these trips help you prepare for your huge, 39,000 nm voyage?

In 2000, I bought an old, 31-foot Mariner, built in Japan; it was what I could afford and its ketch rig and full keel reminded me of Motessier’s Joshua. A naive buy on my part—it was not a Joshua! It took ten years of restoration work to get that boat fit for sea, but that work taught me much of what I needed to know to maintain a boat at sea.

In 2010, I took off on my first solo venture, a two-year, circumnavigation of the eastern Pacific—San Francisco to Mexico to French Polynesia to Hawaii and Alaska and home, about 13,000 ocean miles. [It was] a life changing experience: it was such incredible fun to be on the bleeding edge of one’s own learning and ability–and plying the tract-less, wild sea!

When I got home, I said to my wife, Joanna, that I was really hungry for more of same. She said, OK, but only if I make it something really “big.” The Figure 8 was simply the biggest thing I could think of at the time.

While preparing for the Figure 8 Voyage, I crewed a transit of the NW Passage—this was in 2014—by way of practice. I had by this time a concept of bluewater passagemaking but the shallow, uncharted, ice-infested waters of the Arctic were tough to grok simply from reading.

Then after purchasing Mo in 2016 in Homer, Alaska, I did a solo shakedown in her of about 7,000 miles—Homer, Port Townsend, Hawaii and home. 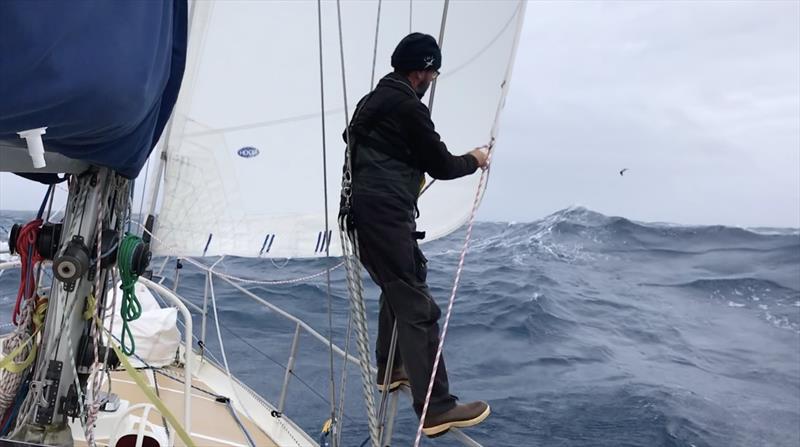 I understand that Moli has a lot of pedigree when it comes to blue-water sailing. What, if any, modifications did you make to her ahead of your big cruise? Also, did you replace any sails or electronics?

I’m Mo’s fourth owner since her launching in 1980, and all previous owners have taken her into the harm’s way of high latitudes—Cape Horn, Antarctica, the Arctic, etc. In fact, it’s a joke in the family that Moli had already done the Figure 8 Voyage—just not in one go.

The boat’s super-tough and, given her constant use, was well-maintained. That said, for a venture like the Figure 8 Voyage, one can’t afford to take chances. So yes, I renewed running and standing rigging, replaced the sails, renewed the Monitor windvane. And her electronics were quite old, so the entire navigation and comms station was updated with current technologies–Simrad chartplotter, Fleetbroadband, Iridium Go, Vesper AIS, 4G radar, etc. 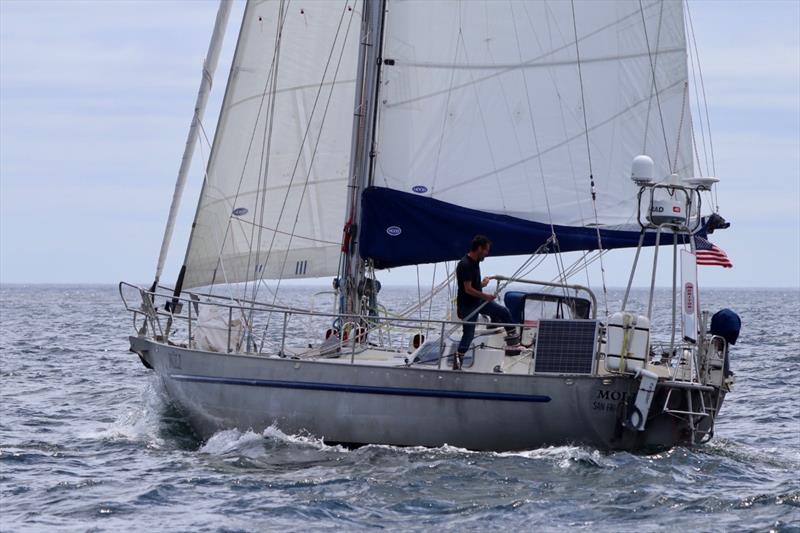 The saying goes in the ocean-racing world that races are won and lost in the lead-up to a big event such as the Vendee Globe or the Volvo Ocean Race. Did you find the same to be true with your expedition? If so, can you please explain?

Sure, and in expedition sailing, there’s a similar saying attributed to Roald Amundsen, “Adventure is just bad planning.” In my case, I spent four years building up to the first Figure 8 attempt—tons of reading, an endless boat search, renewing and testing of boat gear, masses of excel spreadsheets, months of work on the boat, plenty of sea time—and I still cracked up off Cape Horn and in the Indian Ocean.

So yes, intense preparation is very good, maybe even essential, but at some point you have to meet the sea on its own terms, and the outcome of that meeting cannot be guaranteed. 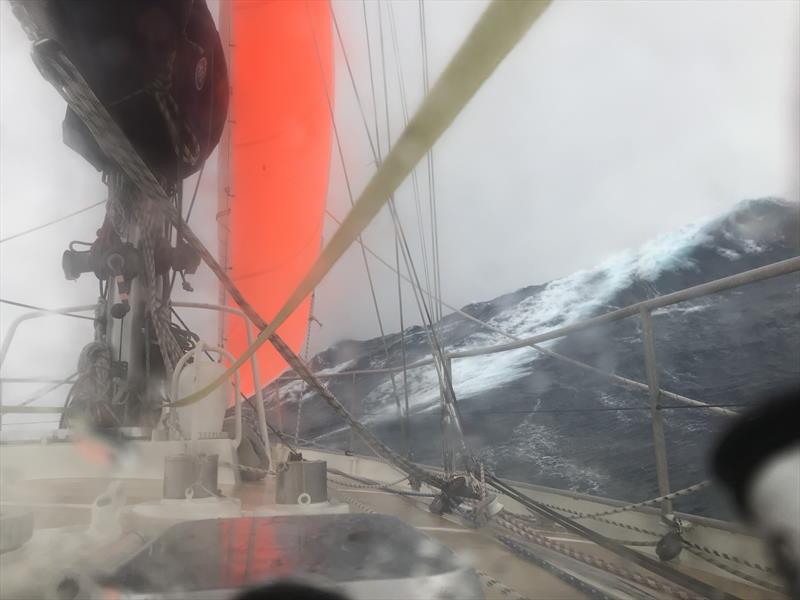 What are your best memories from the cruise? What about your most indelible memories?

Well, a knockdown a thousand miles from nowhere that punches out a pilothouse window and fills the boat full of water is pretty indelible. That happened in the Indian Ocean and it took 48 days to get to Hobart for repairs. Losing both self-steering devices 500 miles west of Cape Horn—hand steering for a week into Ushuaia—pretty indelible too.

But the truly memorable moments are not always the ones that are most death-defying.

For example, in the Southern Ocean, the raw beauty of great seas being surfed by the Wandering Albatross, one of the largest birds in nature, is a wonderful sight. When boat and man are struggling, the Albatross is gracefully at home—very humbling. I love that experience; it’s alien, like visiting the moon, and yet very alive. 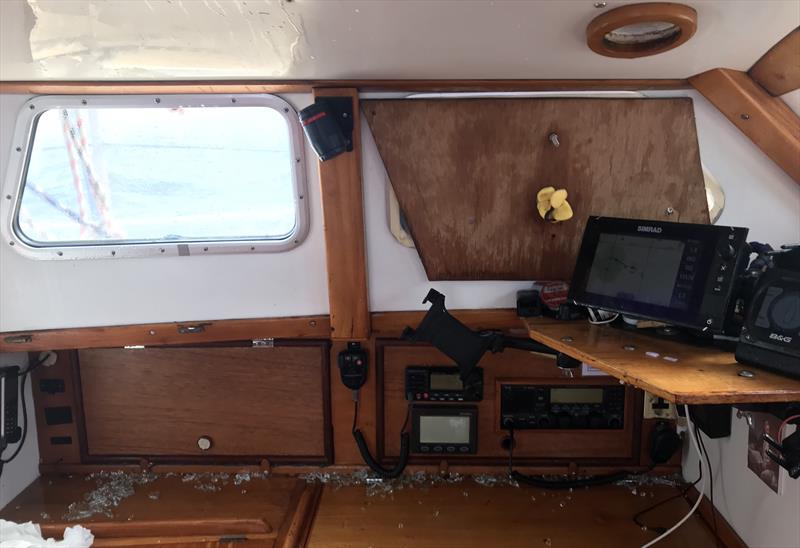 What was harder—plying the NW Passage or circumnavigating Antarctica? Also, what made this the harder of the two challenges?

One thing that made the Figure 8 Voyage unique was that the demands of these two routes were so different. Big wind and seas in the south, pack ice in the north.

I think the south was harder only because it was longer. It took 110 days, over three months, from the first pass under Cape Horn to the second, and for most of that time Mo and I were at 47 [degrees south latitude] and working a gale a week; that’s over 15,000 miles of tough stuff to survive. Super hard on the gear and the human.

The north is equally risky, but the distance is shorter and you have to shoot from the Arctic circle on one side to Arctic circle on the other during a very short summer and before the whole thing starts to freeze up again. Mo and I did that 5,500 miles in 48 days. Both routes are no-sleep enterprises; but one is a real long and glorious grind.

Did you have any close calls with ice?

I learned early that hand steering through pack ice, picking your lane, bobbing and weaving, is huge fun, exhilarating—for the first 18 or 20 continuous hours—and then you’re just really, really tired.

Once during a night passage, I thought I saw dark, ice-free water ahead. I dashed below, flipped on the autopilot, and set the alarm for a five-minutes nap. Head against bulkhead: immediately out cold. On the fourth minute of my five-minute nap, Mo T-boned an ice block the size of a school bus. Came to a full stop as if hitting a wall.

I thought for sure we were sinking, but later when I had a chance to look, the hull was barely grazed. 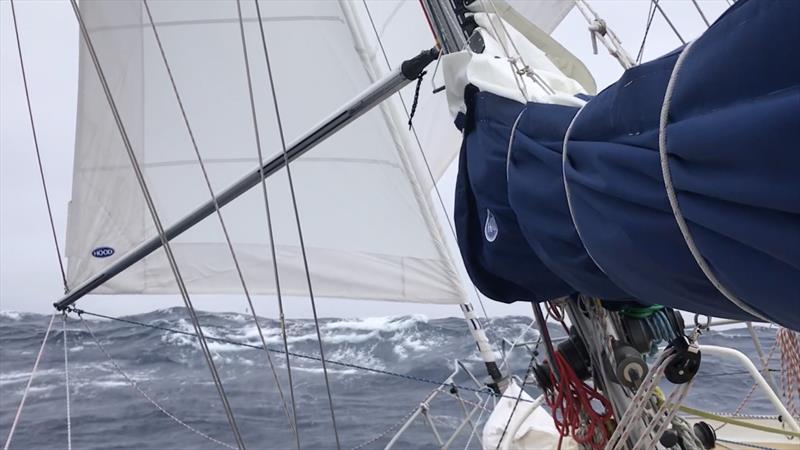 What was your methodology for negotiating areas with icebergs or even sections of broken-up pack ice?

No, pack ice is the main challenge, not bergs. You only see bergs on the Greenland side. Sometimes they are numerous, but most are high enough to create a radar target.

The real challenge is in the Canadian Archipelago, where pack ice gets stuck, can’t flush out. This is where you are likely to be stopped and even turned around. The basic strategy is to go full-out 24/7 if there is an opening and to heave to for a little shut eye only when you absolutely have to. Because if you screw up and miss your opportunity, you’ll be experiencing ten months of winter where Santa Clause lives. 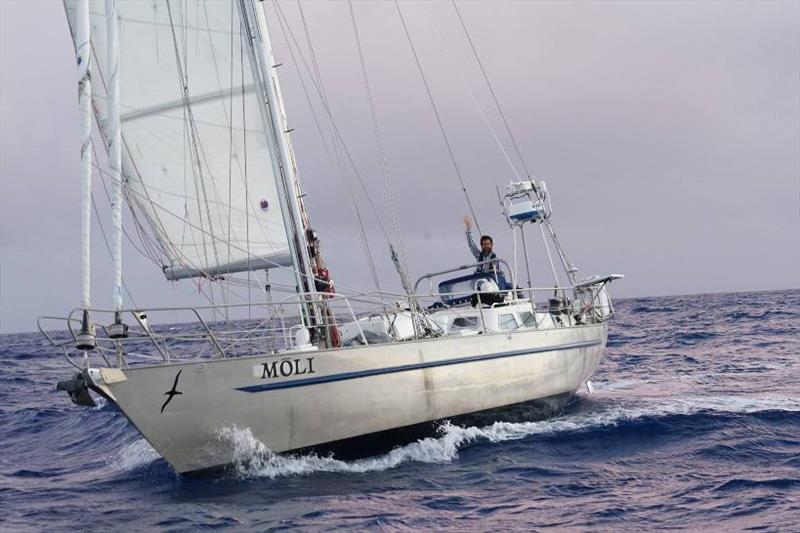 Are you contemplating any more big blue-water voyages? If so, care to share any details with us?

Covid’s kind of knocked plans on their head for the time being. But two attractants are an overwintering project in the Arctic and an expedition to the islands in the Southern Ocean, of which there are many and most of which are uninhabited.

I’d like your audience to know that I have a book for sale. I sent in daily blog posts from sea for both Figure 8 attempts, both replete with high-resolution photos and video.

Once back, I compiled the photos into a coffee-table-style book called simply The Figure 8 Voyage. Available at figure8voyage.com/blog. 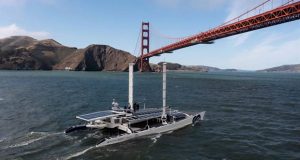 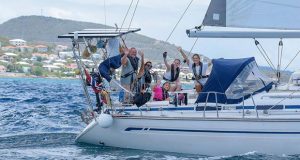 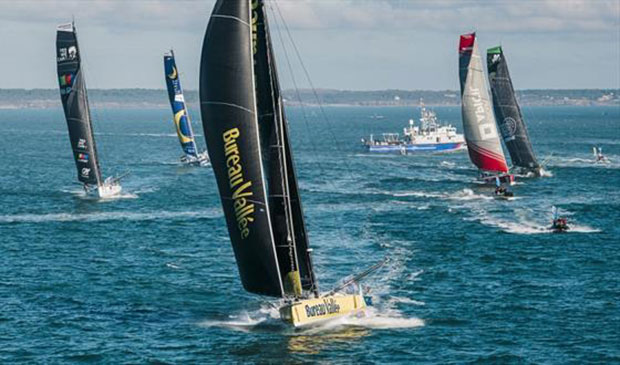