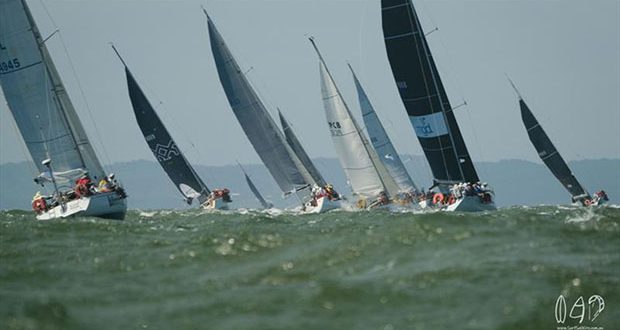 The course is 308.0nm long and starts in Brisbane (Queensland) in Moreton Bay, going to a turning mark off Redcliffe pier; before heading across the bay to Moreton Island then exiting the bay through the NW shipping channel. The course then runs past the Sunshine Coast, keeping Fraser Island to port, leaving Lady Elliot Island to port and then going across what is affectionately known as “the paddock” to Gladstone. The last 15.0nm is a trip up the shipping channel to finish off at the Gladstone Yacht Club.

There are many divisions in this race, including Vintage through to Modern yachts, competing in cruising and/or racing divisions. The boats range from 10.3 to the 30.48 metres Black Jack (100 ft Maxi). There were 37 boats that started the 2021 race, including the J/111 Black Dog with 7 crew skippered by Rodger Vinton.

The forecast was for southeasterly winds of 25-30 knots for the start and then building as the day went on with expected gusts of up to 35 knots and large confused seas off Breaksea at the northern tip of Fraser Island. We started with full main and 3.5 jib and ended up a few minutes late for the start re-running reef lines.

Just after the start we put up the A3 kite but it was too shy, so we changed down to the 3.5 jib and then we were off passing the fleet. The upside of a slow start was that we did get to see most of the other boats.

Once in the shipping channel we were able to hoist the A3 kite again and in the bigger gusts we hit 20 knots boat speed. At NW4 beacon we were going to drop the kite but a gust of 30+knots hit and we broached. It took a while to get the kite back onboard and then up went the 3.5 jib again.

At dusk we put the first reef in and sailed at about 150 AWA running down the large quartering swells. Dark rain clouds would come through and the wind speed would increase, occasionally hitting 40 knots. After Breaksea we jibed onto port to our next mark Lady Elliot Island and then after we reached Lady Elliot Island the wind dropped slightly with top gusts of only 25 knots. We put the A3 up again. This lasted about half an hour before the wind speed built and the A3 was reduced to tapes.

We carried on under reefed main and the 3.5 jib until the finish. The top boat speed we recorded was 24 knots under reefed main and 3.5 jib as we surfed down big seas and we also saw a top wind speed of 41 knots. During the night we were smashed by a big wave and it hit one of the crew with such force that her PFD auto inflated with a bang and set the strobe light off. The look of shock on her face was priceless and we then had to use one of the spare PFDs for the rest of the race. Now we know what happens to an auto PFD and why you need to carry spares.

Our experience with our first B2G race in 2018 was that in heavy weather no one eats much, so we took a lot of finger-food that could be eaten on the rail. We ate things like salad rolls, BBQ sausages, home-made pies, fruit, biscuits, lollies, trail mix, chocolate, and Doc’s rice pudding. Seasickness impacted a few crew, but was managed with the appropriate meds. All of our crew finished the race in one piece and our mascot toy dog SALTY survived, too – just a bit wet. Other boats and crew were not so lucky – there were 11 DNF’s including most of the favorites for line honours and IRC, with a couple of crew injuries including one needing to be air-lifted off in a medical evacuation.

We crossed the line in 6th place after 32 hours and 12 mins, we won the line honors trophy for a yacht under 37 feet and came 2nd in Division Two on both IRC and PHRF. A great result for our J/111!

The boat went very well, with all three people on helm enjoying the challenge of the ride. The only boat damage sustained was one A3 kite and the broken toilet lid. If only we’d not been a few minutes late for the start. Oh well, next time!