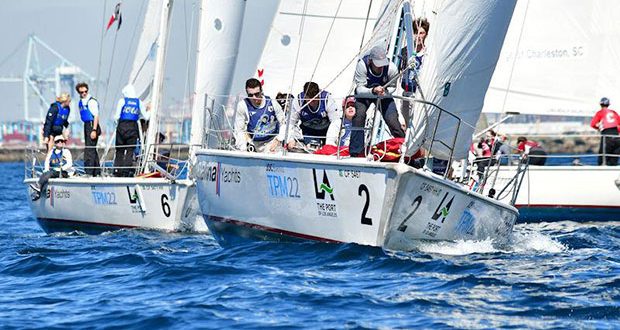 After eight races, defending champion Cal Maritime clung to the top of the leaderboard, with the US Naval Academy close astern.

The Navy Midshipmen and Cal Maritime Keelhaulers have a long-standing rivalry. They are the only teams to have competed in every edition of the Harbor Cup, and both have tasted victory. But today, as winds topped 18-knots, they carried their battles from the racecourse to the protest room (decision pending at press time). 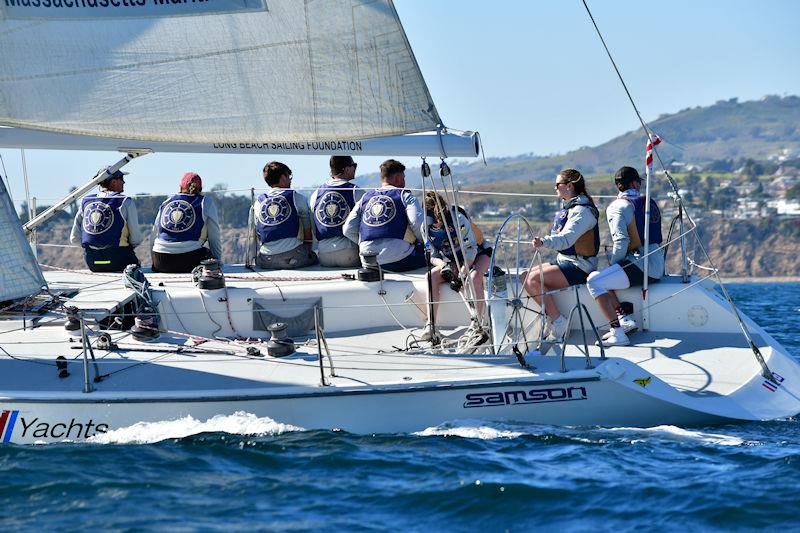 Competition was lively as the teams got up to speed in the custom Catalina 37 keelboats and more familiar with San Pedro’s prevailing wind and seas.

“Initially we postponed for about 30 minutes, waiting for the wind to fill, and thankfully it did, with the westerly coming up to speed and clocking just as we would expect,” said PRO and Race Co-Chair Tom Trujillo. Winds pressed just shy of the top limit of the Catalina 37 fleet, with their fixed sail inventory, but the Race Committee was able to pull off four thrilling races.

California Polytechnic State Univ. won the first race of the day, with Navy second and Univ. Rhode Island third. Cal Poly first competed in the Harbor Cup in 2020: Kai Ponting was there and vowed to return. “Harbor Cup is a super unique opportunity to have an event like this on the west coast,” said Ponting, now captain of the team.

“A lot of our crew like racing big boats, and we really value the chance to sail them at such an awesome event. We didn’t have a chance for a ton of practice, so our main goal has been to just go out there, try to figure it out, and have fun!” 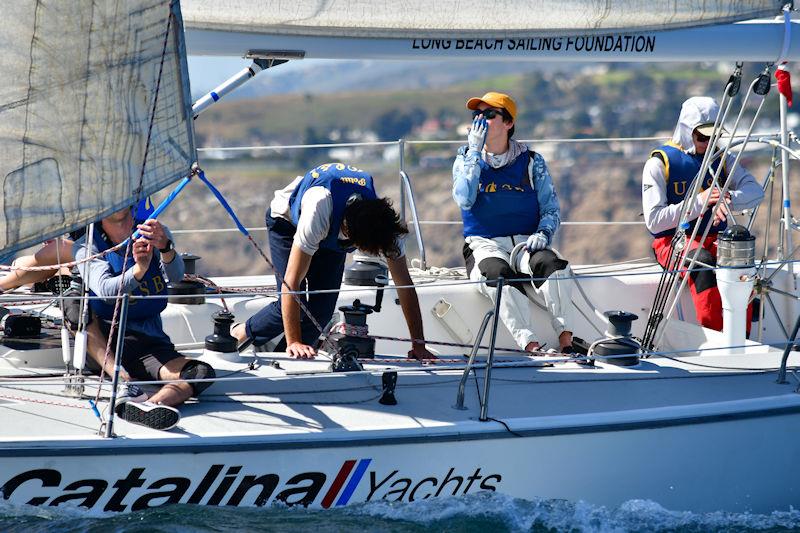 In Race Six, it was Univ. of Hawaii over Univ. of Calif. Santa Barbara and Cal Maritime. Navy returned to the podium with a first place in Race Seven; Cal Maritime took second and UCSB third. And in the day’s final race Cal Maritime secured their lead with another first, followed by College of Charleston and Mass. Maritime. In the final leg of that race, Univ. RI experienced a steering failure 100 yards from the finish. The crew returned safely to the dock using the emergency steering and was requesting redress at press time.

The Harbor Cup regatta is a co-ed event, with teams required to have at least two female crew onboard. This year several schools have more; an encouraging note as we celebrate Women’s History Month and effort to increase diversity and opportunities for women.

“I believe the intercollegiate rule for co-ed racing is one female per crew,” noted LAYC Staff Commodore and Harbor Cup co-founder Jim Morgan. “But when we were putting together this event, we thought ‘If one is good, two is better.'”

Caroline Williams, skipper of the Charleston Cougars team, applauded organizers, however noted, “Having to have a rule just to get women onboard is…” she hesitated, “… pretty lame.” 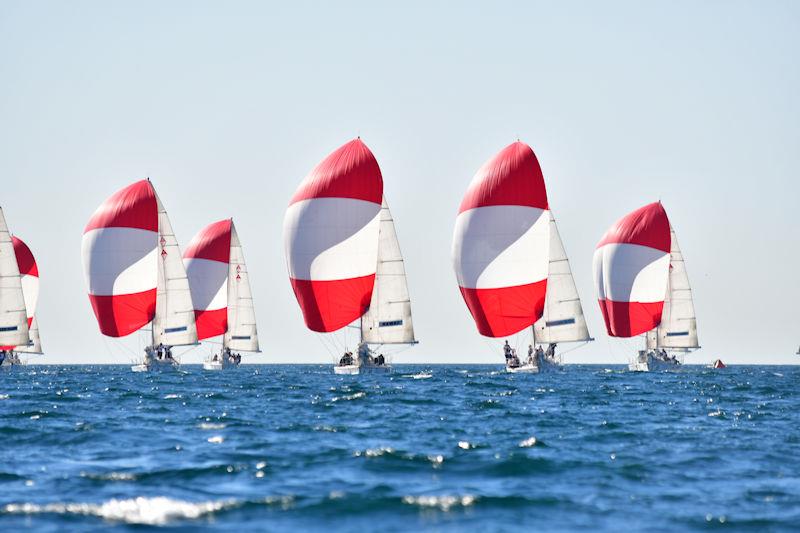 “Half our team is female: we’ve got a real power team with a lot of women on board and I wouldn’t switch them out for anything. They’re the heart and soul of the boat and that’s what keeps us going. Even in the really physically demanding positions. It’s really great to be out there with a lot of females in the important roles on the boat,” added Williams.

“I would tell other teams to dig deep and look at the women on your team. Even if you think they wouldn’t be able to get it done, give them an opportunity to show what they can do: you could be pleasantly surprised.”

Two races remain in the fight for the POLA Harbor Cup, commencing Sunday March 13 at 11:30AM in the waters off San Pedro.