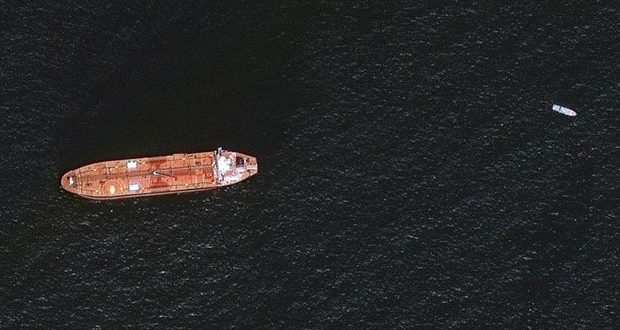 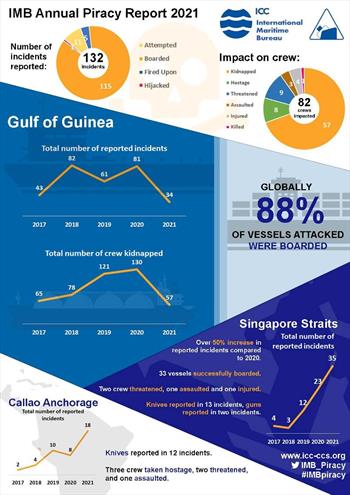 IMB attributes the drop in incidents to vigorous action taken by authorities but has called for continued coordination and vigilance to ensure the long-term protection of seafarers.

IMB Director Michael Howlett said: “While the overall reduction in globally reported incidents is welcomed the IMB Piracy Reporting Centre urges coastal states to acknowledge the inherent risk from piracy and armed robbery and robustly address this crime within the waters of their exclusive economic zone. The IMB Piracy Reporting Centre remains committed to actively engage and exchange information with coastal states to promote safety for seafarers and trade.”

The increased presence of international naval vessels and cooperation with regional authorities has had a positive impact – including, commended, robust actions of the Royal Danish Navy in neutralising a suspected pirate action group in late November. 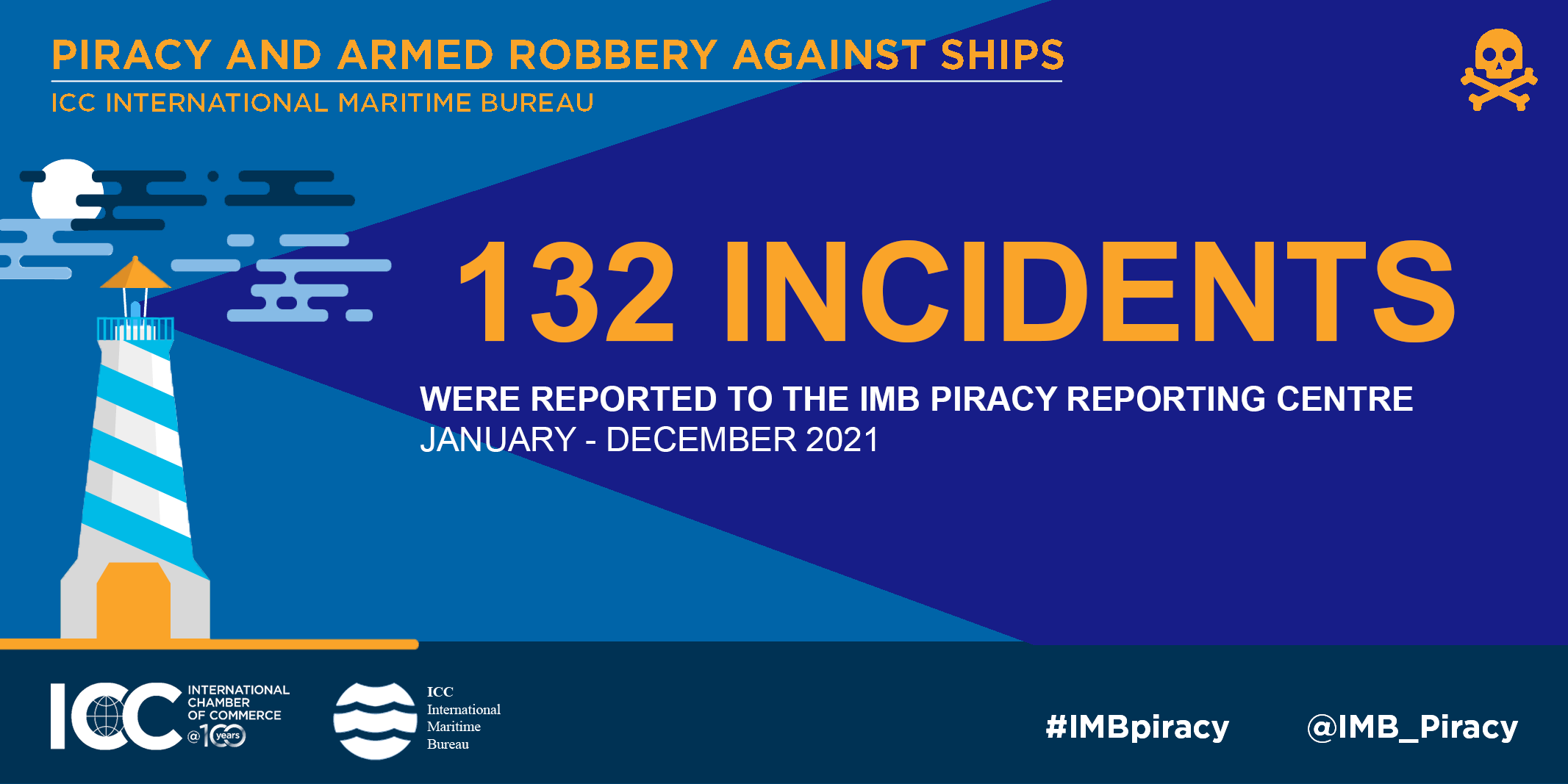 While the regional decrease is welcomed the IMB Piracy Reporting Centre warns that the threat to seafarers persists and continues to urge crews and vessels plying these waters to be cautious as the perpetrators remain violent and risk to crews remains high. This is evidenced by the kidnapping of six innocent crew from a container vessel in mid-December. 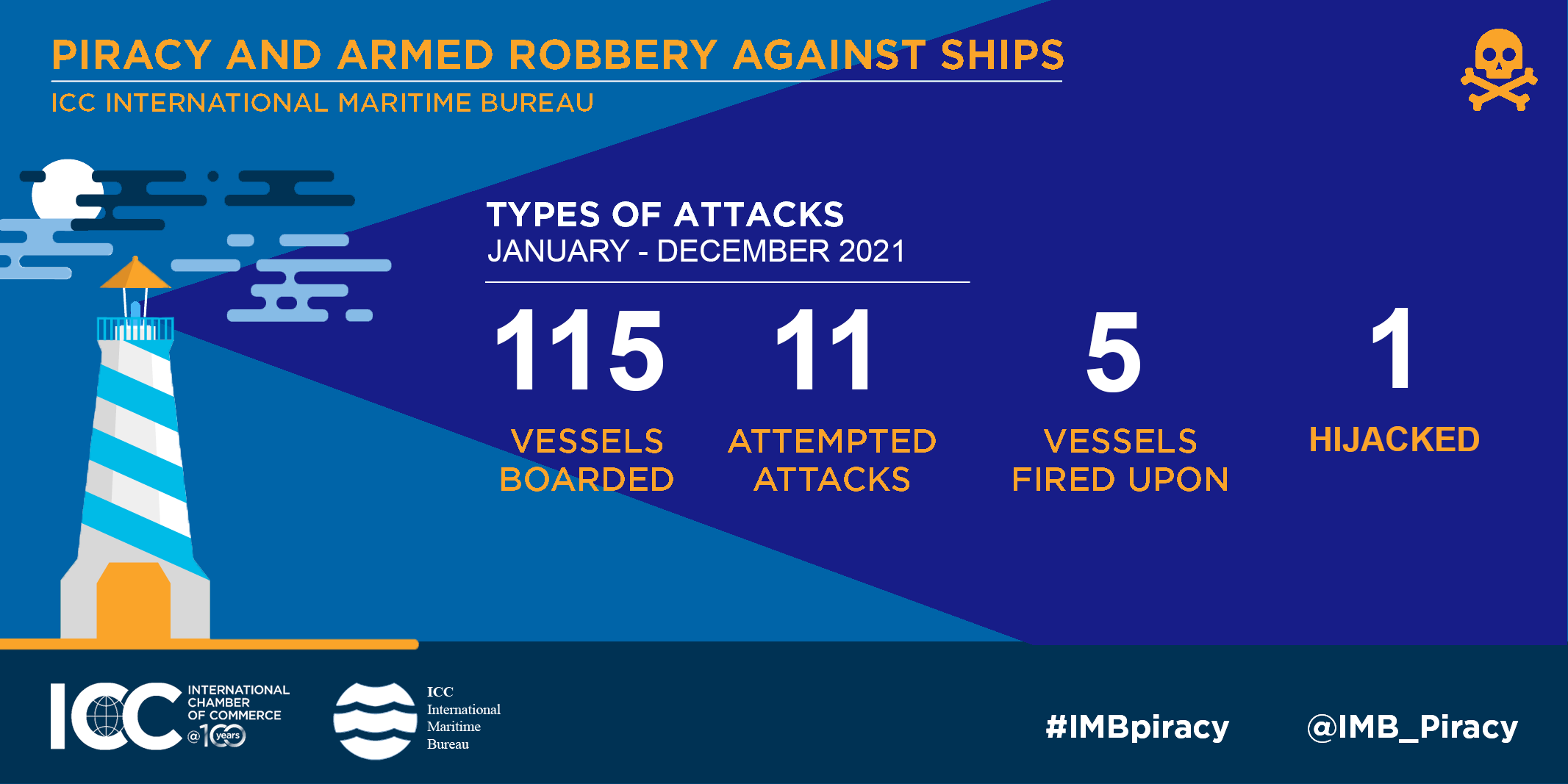 “The IMB commends the robust actions of the international navies and regional authorities in the Gulf of Guinea which appears to have positively contributed to the drop in reported incidents and ensuring continued safety to crews and trade,” Mr Howlett said. “While the IMB applauds these actions it further calls on the coastal states of the Gulf of Guinea to increase their collaboration and physical presence in their waters to ensure a long term and sustainable solution to address the crime of piracy and armed robbery in the region.” 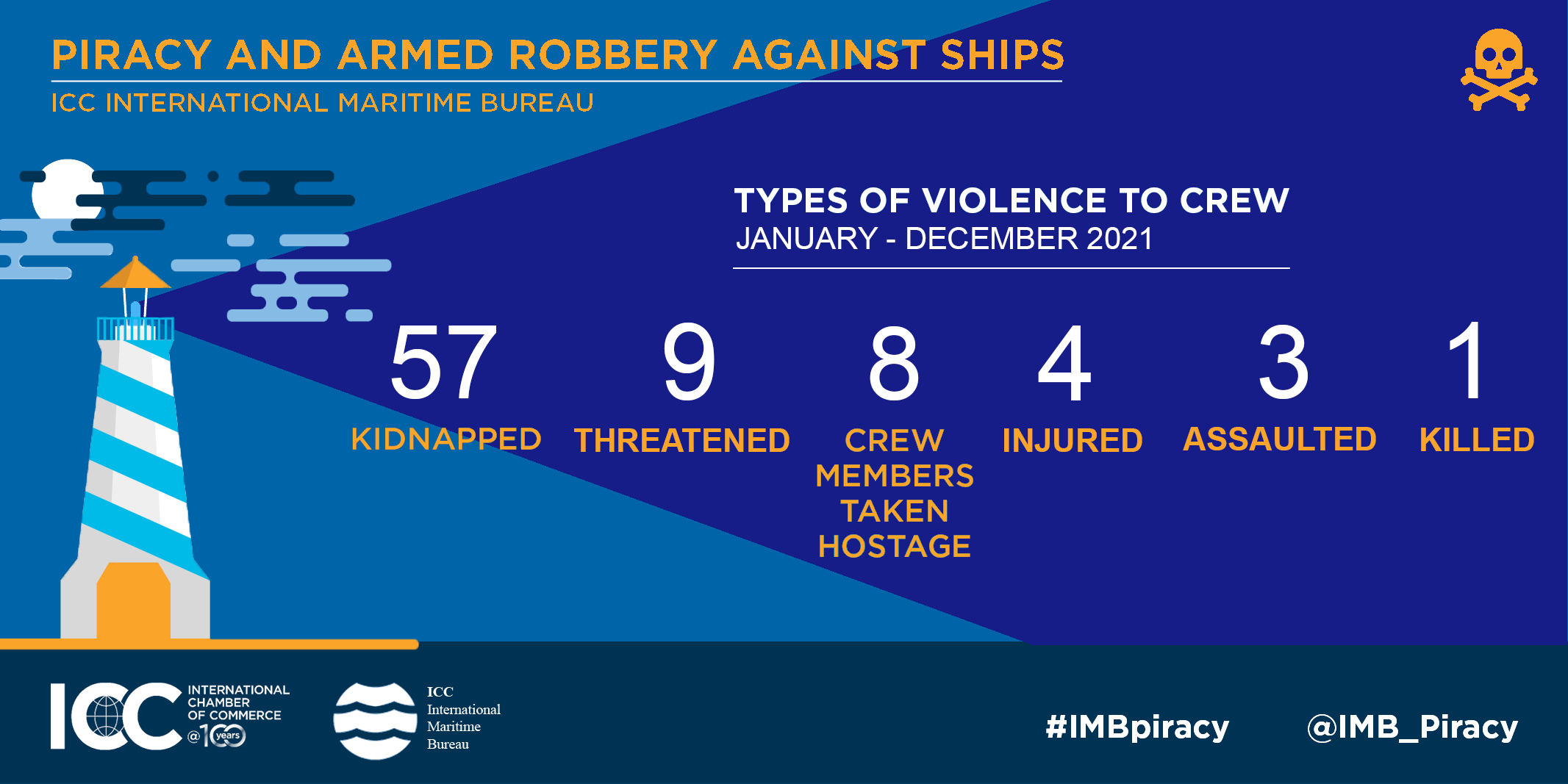 Attacks on the rise in the Singapore Straits

Thirty-five incidents against vessels navigating the Singapore Straits were reported to the Piracy Reporting Centre in 2021, a 50% increase from 2020 and the highest number of reported incidents since 1992. Vessels were boarded in 33 of the 35 incidents, considered mostly to be opportunistic thefts, though two crew were injured in two separate cases. Knives were also reported in 13 incidents and guns in a further two.

The continued efforts of the Indonesian Marine Police are credited for maintaining reduced levels of incidents in the Indonesian Archipelagic, reports received in 2021 were down to nine from 26 in 2020 and the lowest since 1993. Of the reported incidents four were off Jakarta and knives were reported in at least five, in which one crew was threatened. 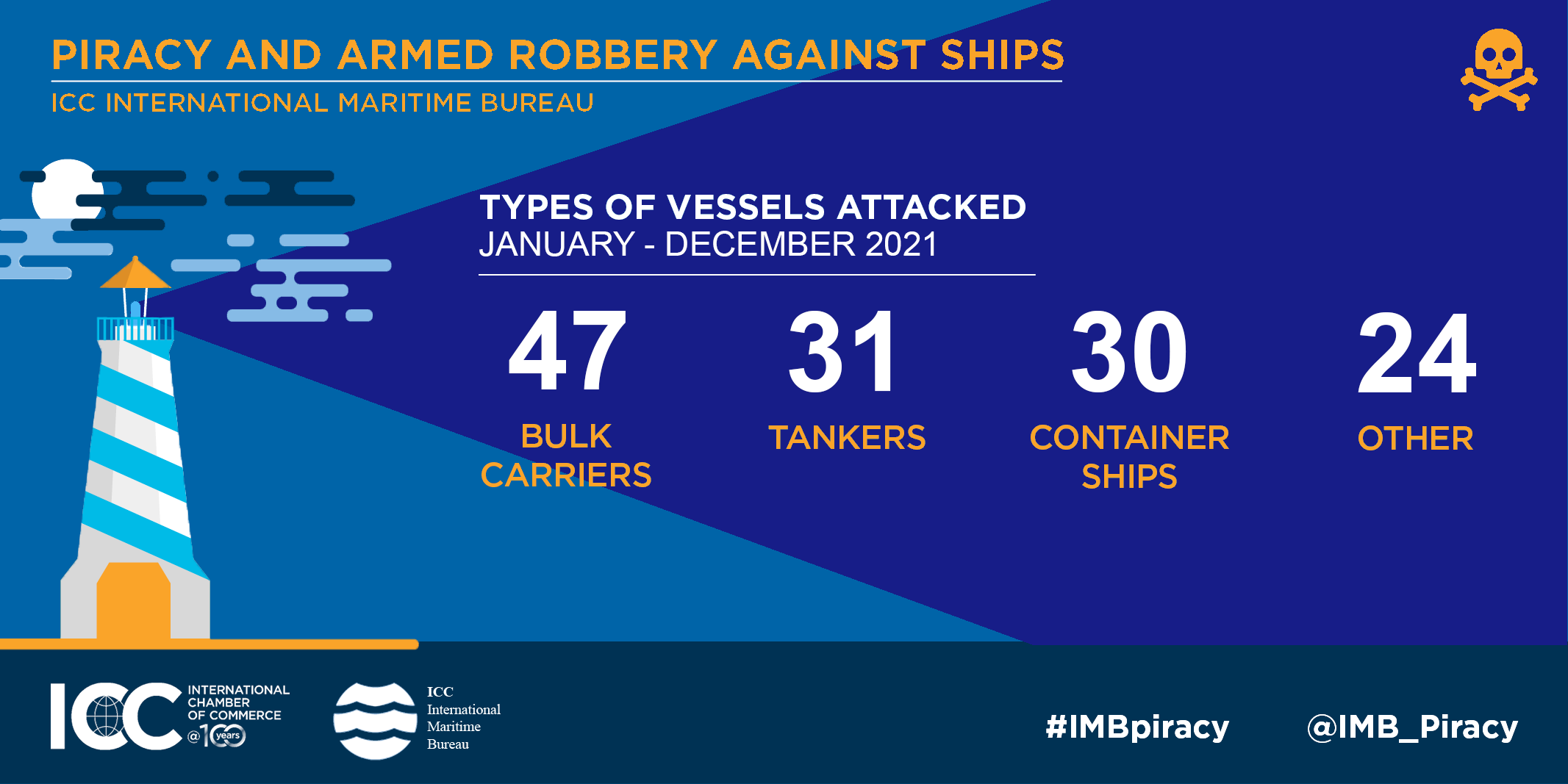 Two perpetrators killed in the Caribbean

In December, at Port au Prince, Haiti, four robbers disguised as fishermen and armed with guns and knives boarded a bulk carrier and threatened the duty crew. The locally appointed armed guards exchanged fire resulting in two perpetrators being killed.

South American ports in Brazil, Colombia, Ecuador and Peru, and ports in Mexico and Haiti continue to be affected by incidents of armed robbery at sea. Thirty-six incidents were reported in 2021 compared to 30 in 2020, with six crew threatened, four taken hostage and two assaulted. Thirty-one vessels were boarded in total, the majority at anchor, figures for the region include three reported attempted boardings and two vessels being fired upon. Incidents in the Peruvian anchorage of Callao have more than doubled from eight in 2020 to 18 in 2021. 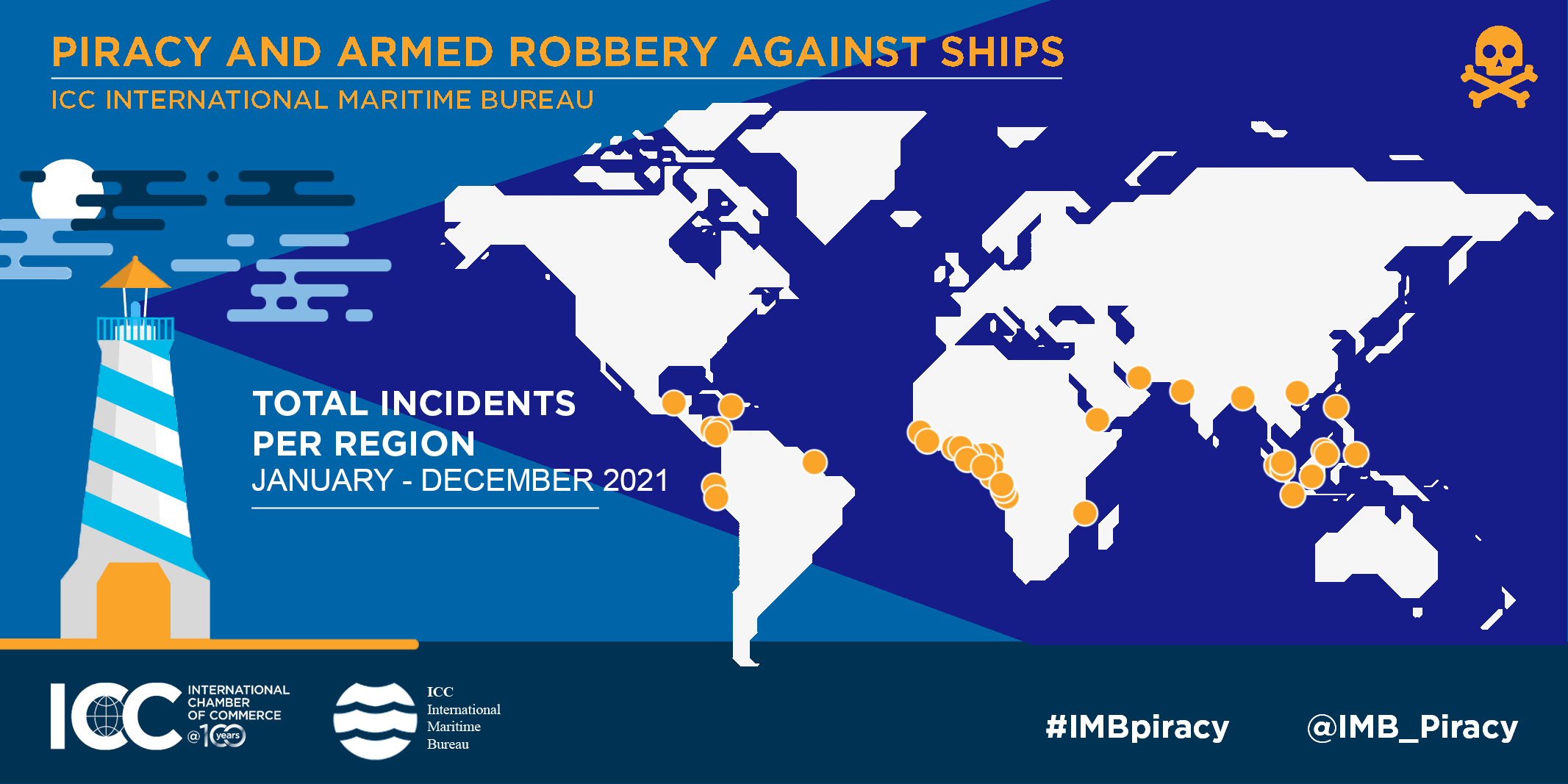 While the direct threat of attacks from Somali based pirates appears to have decreased – along with a further revision and reduction of the High Risk Area in September – the IMB Piracy Reporting Centre continues to encourage vigilance among shipmasters, particularly when transiting close to the Somali coast. 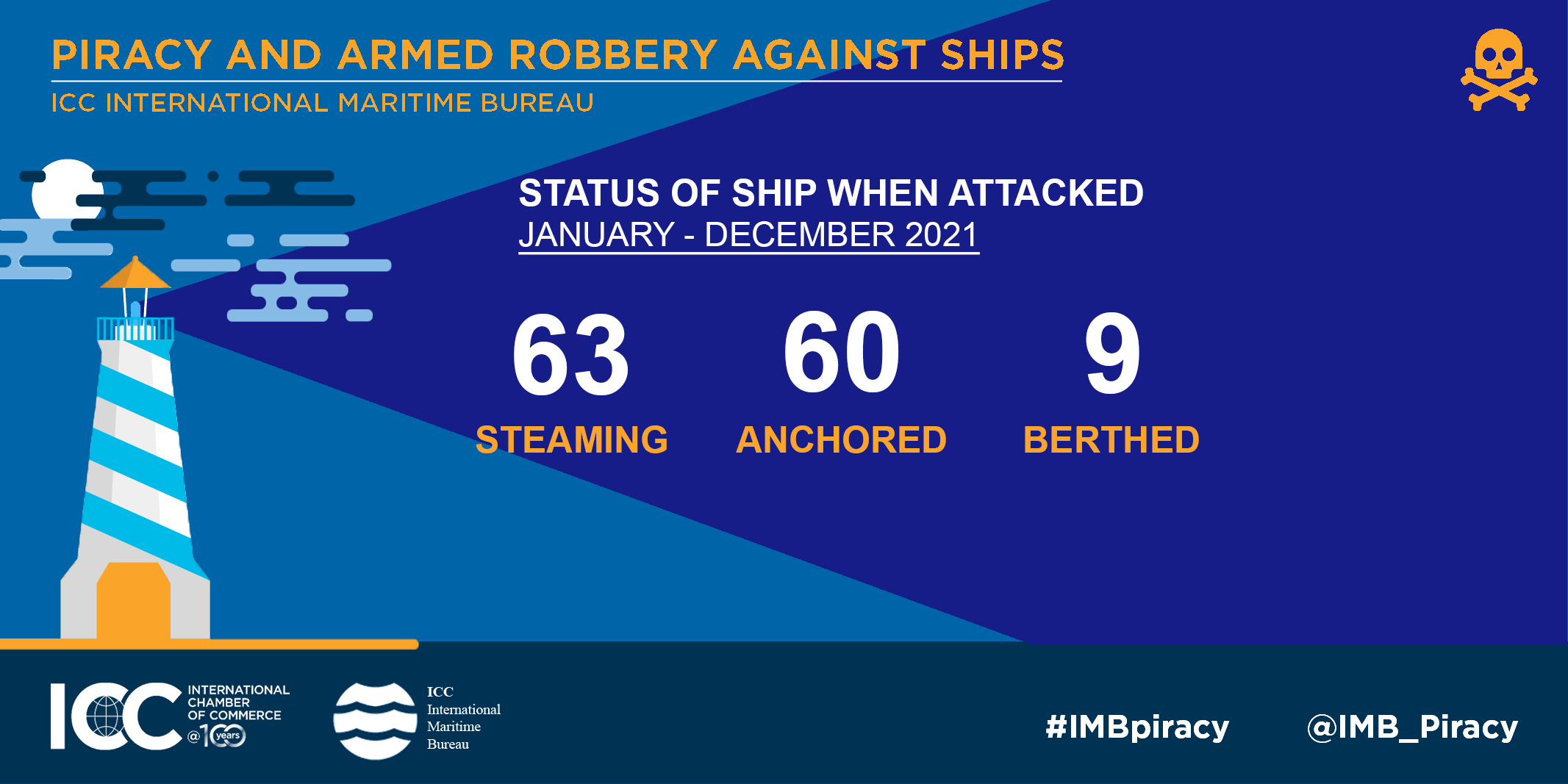 Since its founding in 1991, IMB Piracy Reporting Centre remains a single point of contact to report all crimes of maritime piracy and armed robbery, 24-hours a day. In line with ICC’s purpose to enable business to secure peace, prosperity and opportunity for all, the Centre’s prompt forwarding of reports and liaison with response agencies, broadcasts to shipping via GMDSS Safety Net Services and email alerts to CSOs, all provided at no cost, help the response against piracy and armed robbery, promoting the security of seafarers globally and facilitating global trade.

IMB encourages all shipmasters and owners to report all actual, attempted and suspected global piracy and armed robbery incidents to the Piracy Reporting Centre as a vital first step to ensuring adequate resources are allocated by authorities to tackle maritime piracy.

About the International Chamber of Commerce (ICC)

The International Chamber of Commerce (ICC) is the institutional representative of more than 45 million companies in over 100 countries. ICC’s core mission is to make business work for everyone, every day, everywhere. Through a unique mix of advocacy, solutions and standard setting, we promote international trade, responsible business conduct and a global approach to regulation, in addition to providing market-leading dispute resolution services. Our members include many of the world’s leading companies, SMEs, business associations and local chambers of commerce. 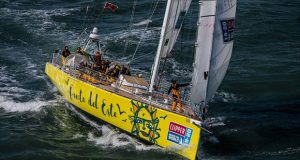 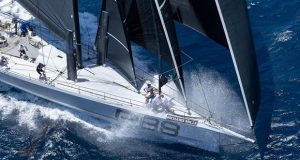 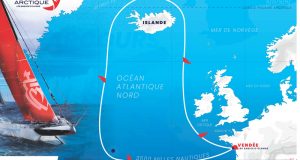 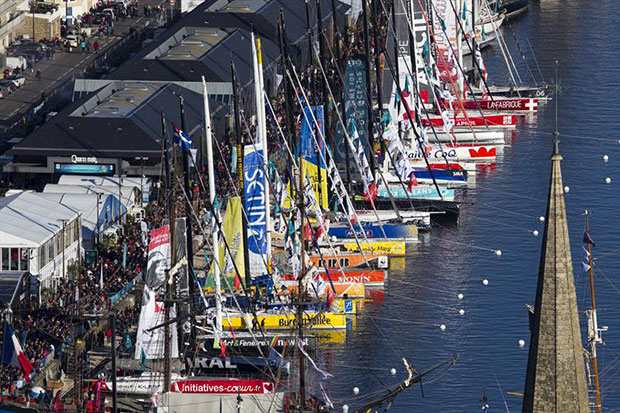