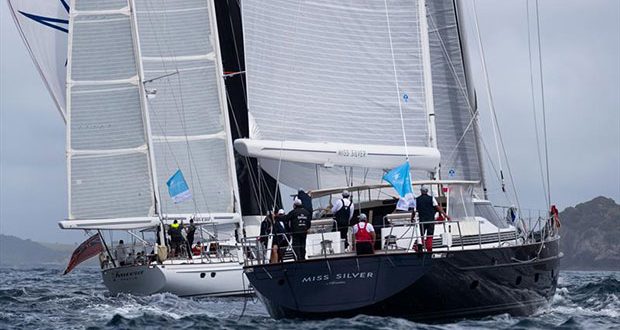 On a rare rainy day in the Bay of Islands, Miss Silver took the first win of the NZ Millennium Cup on Orams Marine Race Day.

Racing in the 2021 Cup started Monday, putting to the test an innovative scoring system which is being used for the first time in a superyacht regatta. With the two leading yachts finishing within four seconds of each other, race officers are pleased with how the system is working.

Racing began under glowering skies, unusual in this part of the world, and saw returning competitor Aschanti IV cross the line first in the start sequence.

The 1954 Burmester yacht has returned to the Cup, alongside captain Kalle Ebner, with both racing in the inaugural NZ Millennium Cup in 2000. However, her lead wasn’t to last for long, with former Cup champion Tawera passing her before the first mark after a higher line from the start saw her make good time towards the first rounding mark.

Catalina and Miss Silver rounded the first mark within one minute of each other, with Sassa-fras two minutes behind, setting the tone for a close race which remained tight until the end.

From the Nine Pin, the fleet gave spectators a glimpse of the quintessential NZ Millennium Cup sight; yachts dotted across the famous waters of the Bay of Islands as they stretched out for home.

Coming down to the final mark, Tawera and Miss Silver locked into battle before a gybe saw Miss Silver pick up more pressure close to the line. On corrected time they were just four seconds apart but it was Miss Silver who was declared the winner of the first day’s racing.

Guests gathered for an evening function sponsored by Propspeed, introduced by Nona Pedersen general manager of Propspeed, and with a wine tasting carried out in person by Josh Scott of Allan Scott Family Winemakers.

Owners and captains will be onsite at a breakfast briefing presented by Ocean Media on Tuesday morning, before Boat International Race Day begins and competitors dive further into the competition.