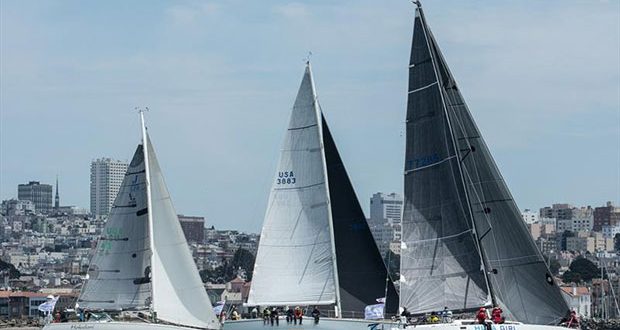 The Pacific Cup yacht race, which calls itself “the FUN Race to Hawaii,” might be calling itself the GREEN race after the completion of their 40th anniversary race from San Francisco to Oahu this July.

Race organizers have announced a partnership with the environmental organization Sailors for the Sea Powered by Oceana, including a commitment to strive for “Gold” level Clean Regatta status for the 2020 running of the race.

The Pacific Cup, first organized in 1980, runs in every even year and attracts around 70 boats and 300-400 sailors to its preparation seminars, events and, finally, a 2070 mile voyage across the Pacific Ocean to Kaneohe Yacht Club on the island of Oahu.

“Since our earliest years, we’ve put an emphasis on environmental responsibility,” says Pacific Cup Yacht Club Commodore Michael Moradzadeh. “Our relationship with Sailors for the Sea will help us formalize our commitment and present guidance to our racers on how they can best address the issues relating to sailing clean and green.”

With a start and finish line located over 2000 miles apart, and with events held at a variety of locations, fulfilling the exemplary standards of “Gold” regatta certification requires attention to detail and a bit of diplomacy.

“We’re working with our host clubs – including Richmond Yacht Club here in California and Kaneohe Yacht Club in Hawaii – to eliminate plastic straws and reduce single-use plastic. Working together on these initiatives with Sailors for the Sea has been great, and we look forward to some successful, and less polluting, events,” reported Rowena Carlson, PCYC Chair for Environment.

Gold Level Clean Regatta status in Sailors for the Sea’s Clean Regattas program calls for the organizers to commit to and accomplish a range of practices, from plastics reduction to paperless entry management to promotion of water-only washdowns and reef-safe sunscreens, to name a few.

“The Pacific Cup has embodied many of these sustainability practices. We have enjoyed working with them to find ways they can really make a positive impact on the environment and instill a lasting sense of stewardship in their participants,” said Paige Myatt, Sailors for the Sea Program Manager.

A key group of contributors to the effort will be the racers themselves. Around 400 sailors will be called on to keep their waste to a minimum, and to dispose of it responsibly only on shore. As in prior races, Pacific Cup participants are supportive of these directions, and have gone beyond suggested “best practices”, acting as spotters for ocean debris and participants in NOAA and other scientific organizations’ research efforts to spot surface pollution and to track ocean wildlife such as whales.

The race begins the week of June 29 at Saint Francis Yacht Club in San Francisco.