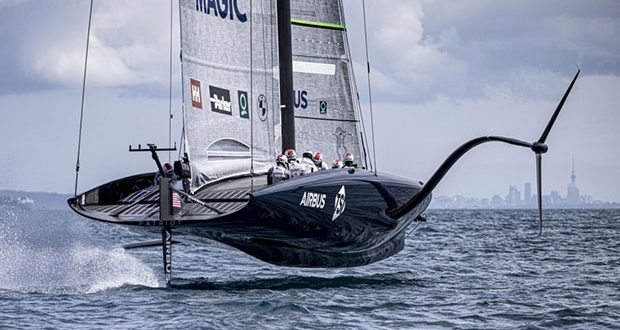 Meet the ‘Patriot,’ the New Lightning-Fast America’s Cup Foiling Yacht Representing the US

After being airlifted 9,000 miles from the factory, the 45-foot sailing racer exceeded designers’ initial expectations by zigzagging around the Auckland waterfront at insane speeds.

Patriot, the just-launched America’s Cup racing yacht representing the United States, completed its first week of sailing last week in New Zealand. The New York Yacht Club’s representative team, American Magic, tested the potential of a design that had only been proven by computer simulation. The 75-foot navy-hulled Patriot, which just days before had been shipped by cargo plane 9,000 miles from Rhode Island, streaked across the Auckland waterfront, zigzagging on its foils, videos suggesting it reached its “sound barrier,” or top speed, of an estimated 50 knots (America’s Cup teams don’t like to talk about top speeds), or 57 mph.

“We went off the dock thinking that if the breeze filled in, we’d have a good sail,” Terry Hutchinson, skipper and executive director of American Magic, said after the sail. “Straight away, we came into 21 knots [of wind pressure], and we were into it. Despite having a brand-new boat that we were all excited about, the whole session felt normal. That’s a great validation of our shore team and all of the work put in since we launched the Mule in 2018.”

“The Mule” was the first prototype that American Magic built to train its crew on at its facility in Pensacola, Florida, and that basic design was followed by Defender, a more complex boat that has been decommissioned since Patriot’s arrival. Like its competitors Lunna Rossa from Italy, Britannia from the UK and the America’s Cup defender, Te Aihe from New Zealand, American Magic won’t divulge technical details about Patriot, beyond the fact its steering station is more forward than on Defender. 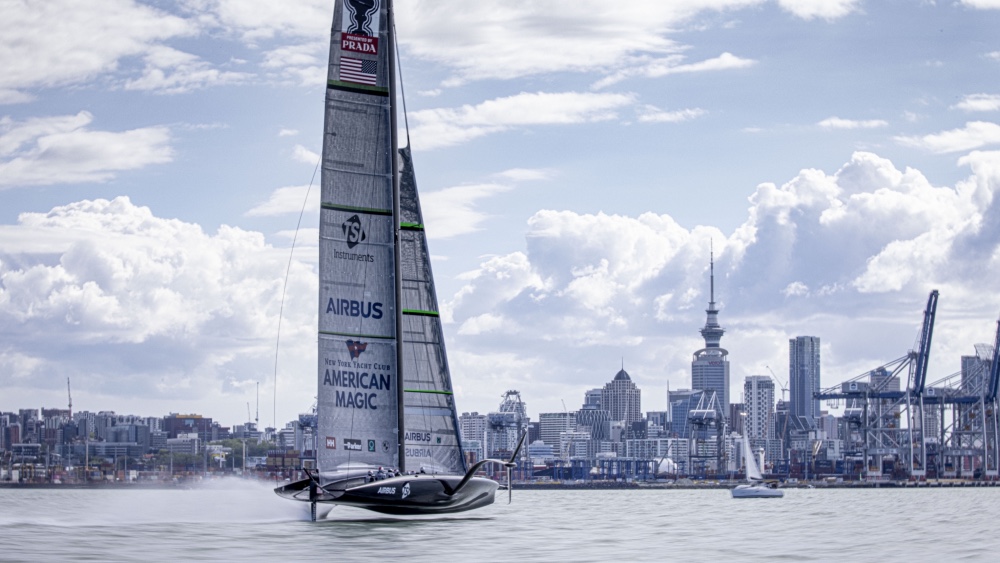 Patriot performed her first week of tests in front of the Auckland waterfront recently, as her team learns the idiosyncrasies of the lightning-fast foiling yacht, and designers figure out how to tweak for maximum speed. Courtesy Will Ricketson

The 75-footer is clearly fast, even out of the box, and for the next three months, designers and specialists will tweak the carbon-fiber hull and 1560-square-foot mainsail to make it even faster.

The world’s foremost sailing event, the America’s Cup has been around since 1851, though the last three Cups were more like Formula One racing, compared to the stately, slow-sailing monohulls of previous generations. The last three Cups have all been designed around foils, starting in 2013 with the AC72, and then three years ago, the boats became smaller, and much more nimble, 50-ft. catamarans that not only accelerated like an F-22 Raptor, but could nearly pivot on their own axis.

The last-generation cats were a bit too wild, so the powers that be came up with the current AC-72 class using a one-design rule where all competitors had to use common parts. The idea was to level the playing field. Organizers supply some parts of the boat, including the mast, rigging, foil-cant arms and hydraulics. The boats—16 feet wide with a crew of 11—are also built of lightweight composites because they’re designed to fly, rather than plough through the water. 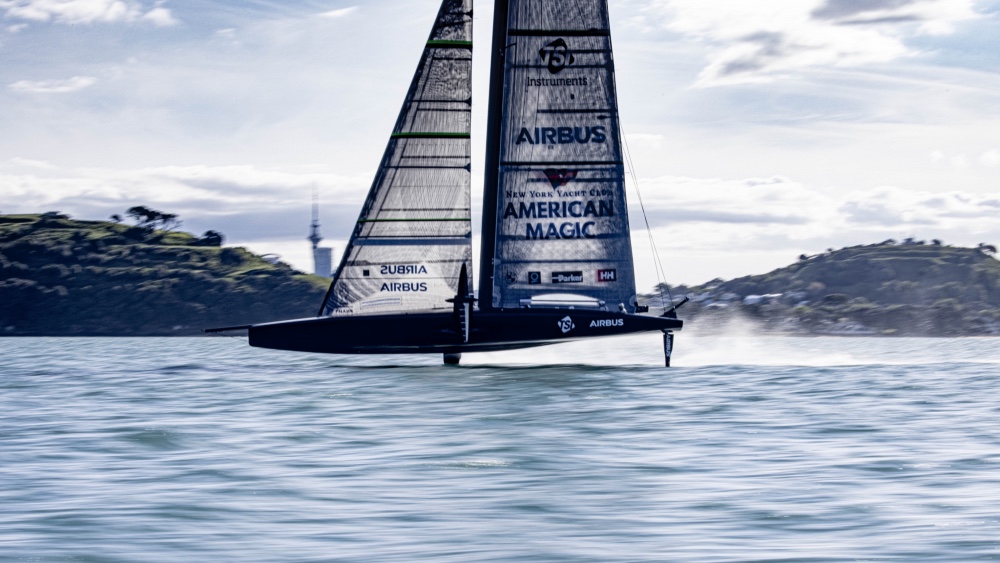 While America’s Cup teams do not release top speeds, it’s estimated that the AC75 boats break the Cup’s “sound barrier” at about 50 knots, or 57 mph. Courtesy Will Ricketson

Patriot’s foil-cant arms are also designed to move both under or outside the boat to provide the leverage to keep it upright. If it does capsize, the crews can right the boat much easier than the previous generations of foiling racers. Another new evolution for this America’s Cup is the twin-skin mainsail on the 87-foot-tall mast. The double-sail skins combine with the spar to generate the power the AC75 needs to foil. On the last two generations, the sails were much stiffer sail-wings that many non-Cup racers complained about because there was no trickle-down technology for the rest of the sailing world.

Beneath the water, Patriot also has an interesting breakthrough design. The foil-cant system uses new technology that employs a battery-driven, hydraulic-power unit to raise and lower the strong, but very heavy, foil-cant arms, that give the boat its stability and speed. As the boat changes tacks, the cant system is activated, placing one hydrofoil in the water, and lifting the other one out, where its weight becomes ballast.

Beyond the sail plan and hull design, the foil wings at the end of the arms will be another of Patriot’s secret weapons. American Magic designers will have the ability to create any design they believe will be most effective to give the boat an edge over competitors, and the next month will be devoted to trying new shapes and sizes. 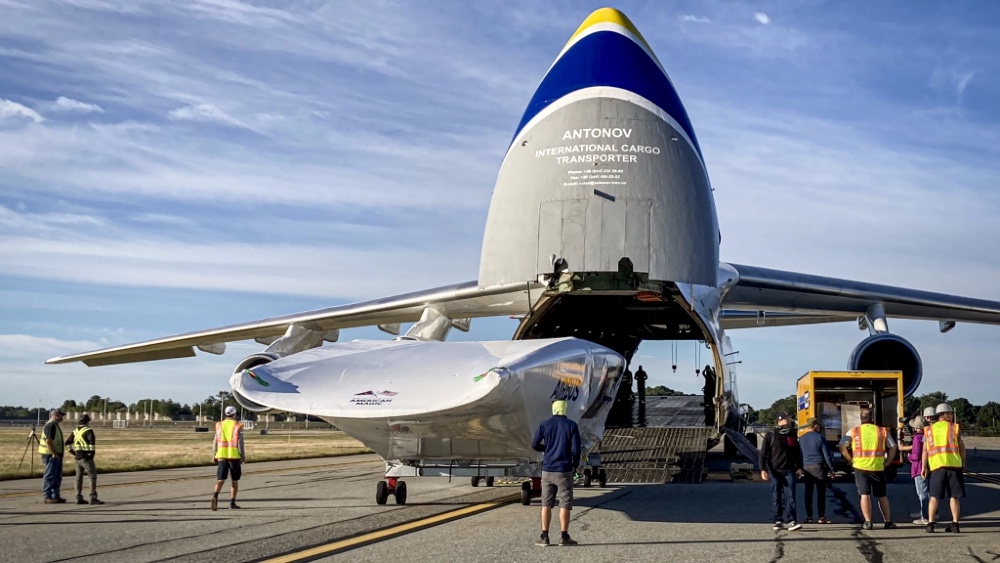 Patriot was built in Bristol, Rhode Island, by a 50-strong team and then shipped by cargo plane 9,000 miles to Auckland. Courtesy Will Ricketson

Considering the America’s Cup’s ambitious timetable, and the unexpected time pressures Covid-19 put on design and production of Patriot in Rhode Island, it’s amazing that this yacht came through so well. “This team didn’t exist three years ago, and now we have three boats built and two AC75s launched,” said Marcelino Botin, American Magic’s lead designer. “The first thing we need to focus on next is to make sure the new boat is sailed the way we want it to be sailed.”

Hutchinson says that Patriot’s initial performance was encouraging, especially on its first gybe. “We had a great nosedive, and that was exciting,” he said. “It was nothing that we haven’t seen or done on our other boats, and our familiarity with Patriot will increase rapidly over the coming days.” 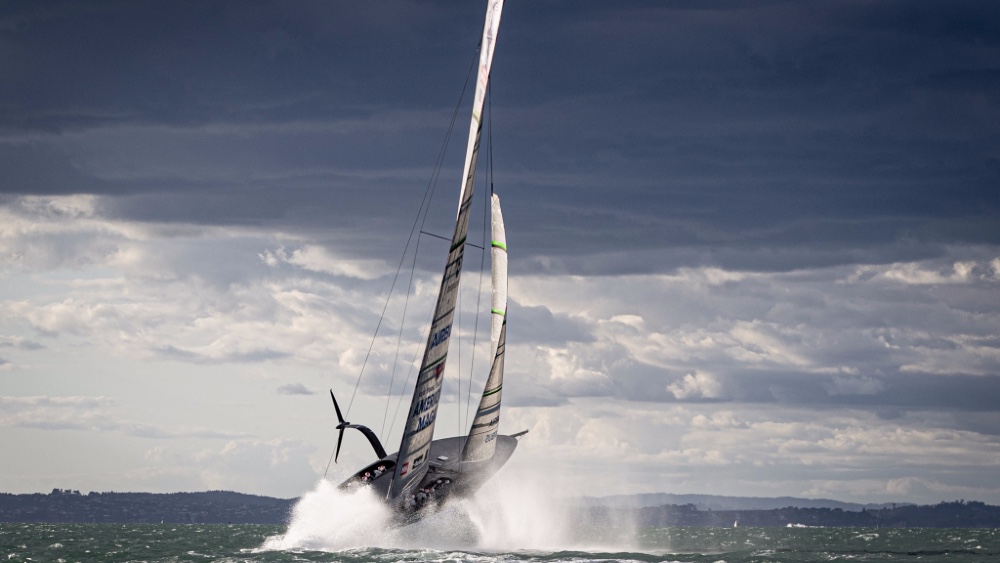 The powerful foils allow Patriot to tack and jibe at high speeds, and to self-right if it capsizes. Courtesy Will Ricketson

After the America’s Cup World Series and Christmas Cup from December 17 to December 20 will come the Prada Cup Challenger Selection Series, from January 15 through February 22, 2021, where Patriot will compete against Luna Rossa and Britannia II for the challenger title. The winner of that event will then compete against Emirates New Zealand for the America’s Cup, which runs from March 6 through 15, 2021.