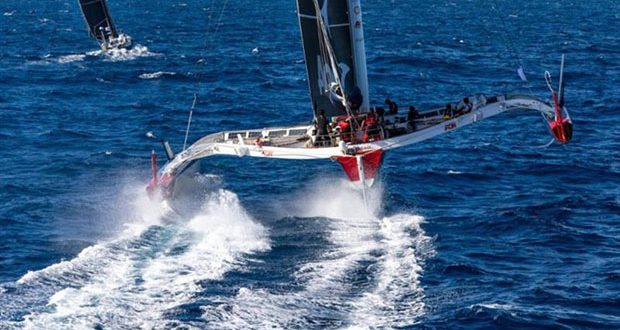 The Ultimes, the world’s fastest offshore racing yachts, may be the pace-setters in next month’s Rolex Fastnet Race with the potential to get around even the new elongated course in less than a day – but not far behind them will be the MOCRA class, mostly racing in considerably more comfort.

Since the MOCRA (Multihull Offshore Cruising and Racing Association) was set up in 1969, multihulls, both catamarans and trimarans, have evolved hugely. Back in the day many of these vessels were often either floating caravans with performance to match, or feather-weight racing machines of questionable construction and engineering. In the intervening decades massive steps forward in design, composite construction and structural engineering and lighter weight everything, from mast tip to foil bottom, have transformed these craft. Today once over the aesthetic differences between monohulls and multihulls, and aware that they can in ultimate circumstances capsize, modern multihulls can simply offer more of everything – dramatically more performance or more space and often both – compared to an equivalent monohull. 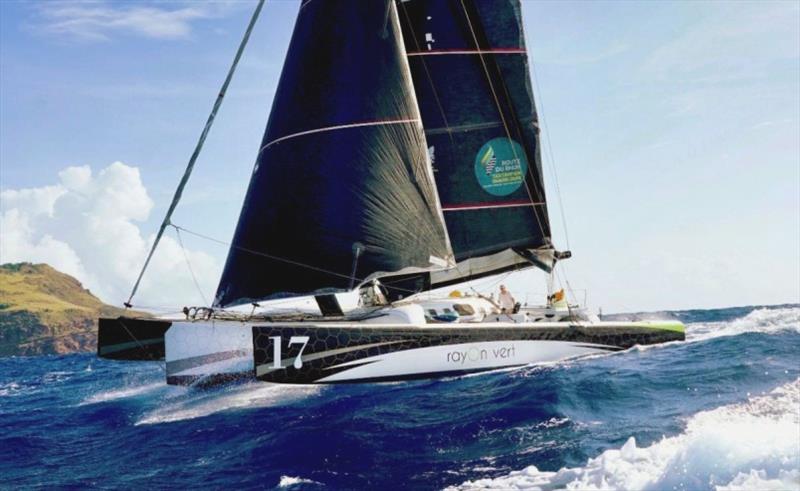 One of the MOCRA’s greatest feats is its rule that for decades has allowed profoundly dissimilar multihulls to compete fairly. In this year’s Rolex Fastnet Race this will be put to the test with boats ranging from Tim Whittle’s 30ft T3 Trifoiler L’Albatros to Adrian Keller’s 84ft Nigel Irens designed performance cruising catamaran Allegra.

Leading the MOCRA class on the water will certainly be the two MOD70s, from America Jason Carroll’s Argo and from Italy Giovanni Soldini’s Maserati. Neither of these grand prix trimarans is an ‘in class’ MOD70, both having upgraded foil packages to encourage them, if not to fly fully, then, at least to reduce displacement. Of the two, Maserati has the more extreme foil package including a ‘manta’ foil on the daggerboard on her centre hull, which allows her to ‘fly’ on three points (this, plus her leeward foil and rudder). 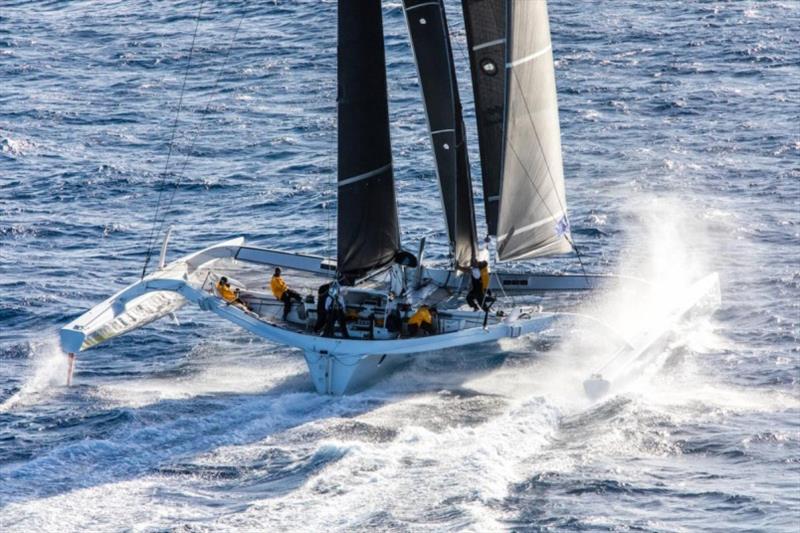 While the nimble tris, such as the former MOD70s, down to Andrew Fennell’s speedy looking Shuttle 39 trimaran Morpheus, represent the grand prix element of the MOCRA class, the biggest growth area is fast cruiser-racer cats.

The concept of performance catamarans with huge interior volume is not new – Tornado Olympic gold medallist Reg White’s company Sailcraft built examples such as the Iroquois and Apache in the 1970s, followed by Derek Kelsall designs and John Shuttleworth’s composite creations like the Spectrum 42 from the 1980s and on, among many others (the latest version of the Spectrum 42, the Pulsar 50, is taking part in Oren Nataf’s Rayon Vert with a crew including Sidney Gavignet. 40-50 years later and with much better understanding of their design, significant improvements across the board mean today’s catamarans of this type, break less, slam less, go upwind, can perform well on all points of sail and capsize about as often as monohulls sink. 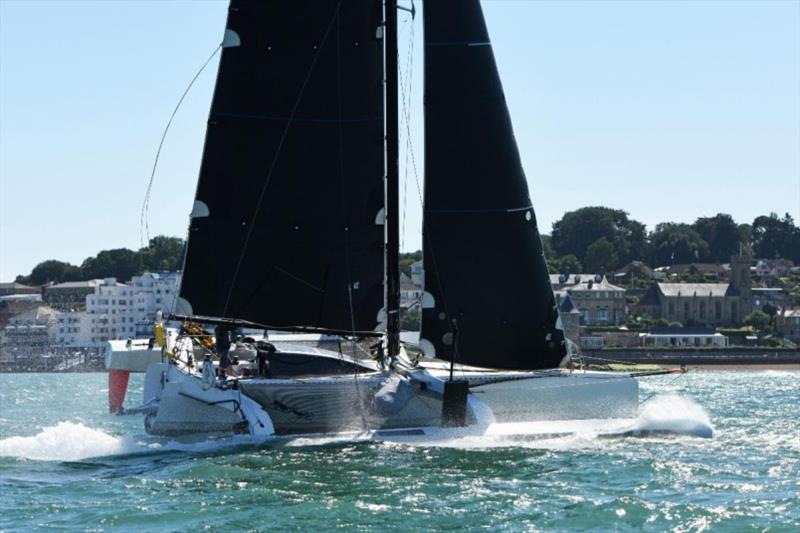 Best known of this genre internationally are the Gunboats, but in this year’s Rolex Fastnet Race, the fast cats are largely represented by the four TS42 and TS5s from Lorient-based Marsaudon Composites. In 2019 great supporter of French yachting, Christian Guyader, won the MOCRA class aboard his TS42 Guyader Gastronomie. This year he returns with the newer 50ft TS5 Guyader Mext and a crew once again including former B&Q Castorama boat captain Loick Gallon and pro sailor Gwen Chapalain, who has entered the same boat in next year’s Route du Rhum. Of this year’s Rolex Fastnet Race, Chapalain observes: “We won the last edition on corrected time, but also in real time. This year it will be harder because there are MOD70s that go much faster than us. It’s great to finish in Cherbourg. It makes the course a bit longer, but it adds to the game because we can play on the whole width of the Channel. It will be a great party in Cherbourg…”

In this Rolex Fastnet Race the ultimate expression of a modern fast cruising catamaran is Adrian Keller’s palatial Irens-designed 84 footer Allegra. The boat was designed to be faster on all points of sail and more spacious than larger equivalent monohulls and she demonstrated this on her first delivery to the Med when she hit 29 knots. Since then, as her Swiss owner has enjoyed racing her ever more, Allegra has been through a constant program of development including adding 6ft to her transoms, bringing her up to her present length (and thereby reducing transom drag) and fitting a J0 with inboard sheeting. 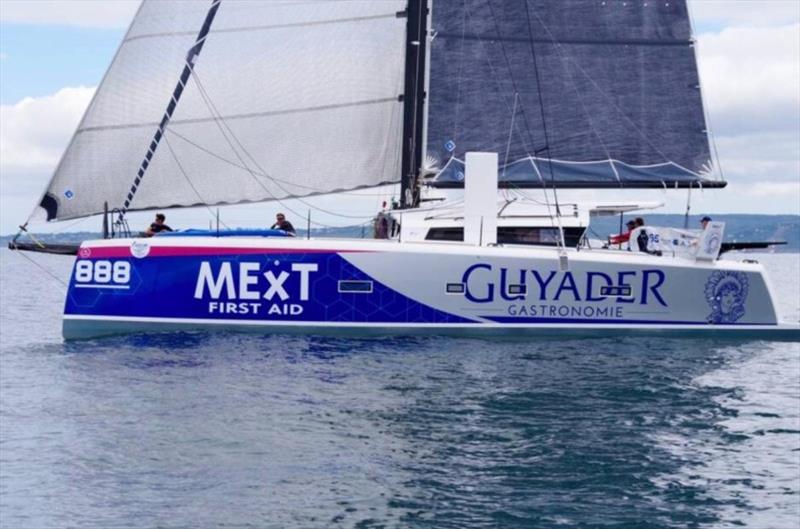 In the 2019 Rolex Fastnet Race Christian Guyader won the MOCRA class aboard his TS42 Guyader Gastronomie. This year he returns with the newer 50ft TS5 Guyader MExT – photo © Olivier Bourba

“These boats do an amazing job of shifting a luxury apartment at pace around a difficult race course,” explains Larsen, who almost 10 years ago set the present world sailing speed record of 68.33 knots aboard his Sailrocket 2. “I liken them to rally driving Bentley Continentals – they are hugely capable cars with incredible breaks and engines and handling packages, but at the end of the day it is a Bentley Continental and, when things go wrong, it weighs a lot and you are not in the rally car you might have been in, that might have made it out of that situation.”

As a result, Larsen says they are more stressful to push hard than purpose-built, full-on racing trimarans. “These are very complex boats with hydraulics and systems and power packs etc, and a lot of it is fly-by-wire. You are releasing travellers and the mainsheet from up by the helmsman.” Nonetheless, after several years campaigning her, today they are able to throw Allegra around the race course and can sail her to her design limits even in races such as the last windy RORC Caribbean 600. 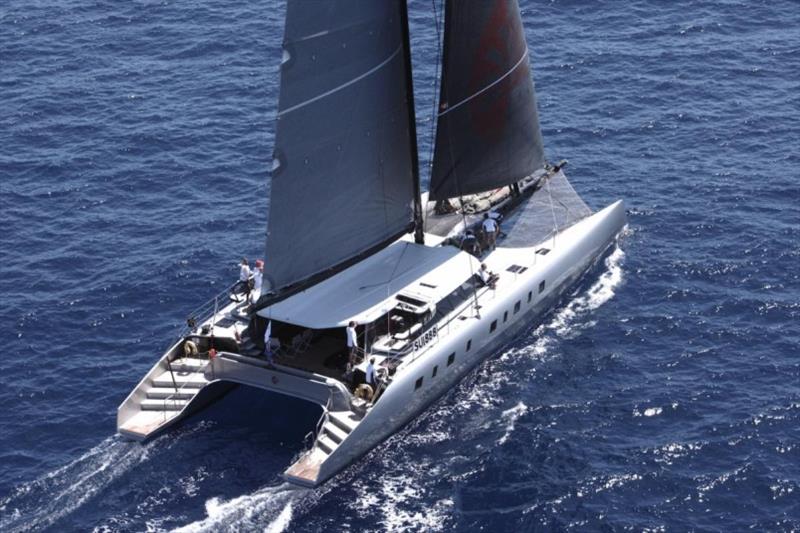 Another example is the Outremer 5X Racing No Limit, the all-carbon version of the La Grande Motte-based builder’s 60ft flagship catamaran model. This is being campaigned by Yann Marilley, former Team Manager for Yann Bourgnon, Alain Gautier and Gitana, who developed the boat with former Elf Aquitaine multihull skipper, the late Jean Maurel.

Among No Limit’s crew for the Rolex Fastnet Race will be French offshore legend Loick Peyron. The two time OSTAR winner, Jules Verne Trophy holder, America’s Cup helmsman and Vendee Globe competitor has a strong history with the Rolex Fastnet Race. In 2011 he skippered the 40m trimaran Maxi Banque Populaire setting a new outright race record, breaking the previous record he had set in 1999 aboard his ORMA 60 Fujicolor. Peyron’s record was only broken by the latest generation Ultime trimarans in 2019.

Not all the fast cruising cats in the Rolex Fastnet Race are Swiss or French. A company producing the most successful examples in the UK is Dazcat just across the Tamar into Cornwall. For Isle of Wight-based James Holder this will be his fourth season and second Rolex Fastnet Race aboard his 42ft Dazcat 1295 Slinky Malinki (named after the cat in Lynley Dodd’s children’s stories). Similar to Allegra, Holder says only now have they been able to reap the benefits of all their development and ‘getting to know the boat’ time of the past seasons. 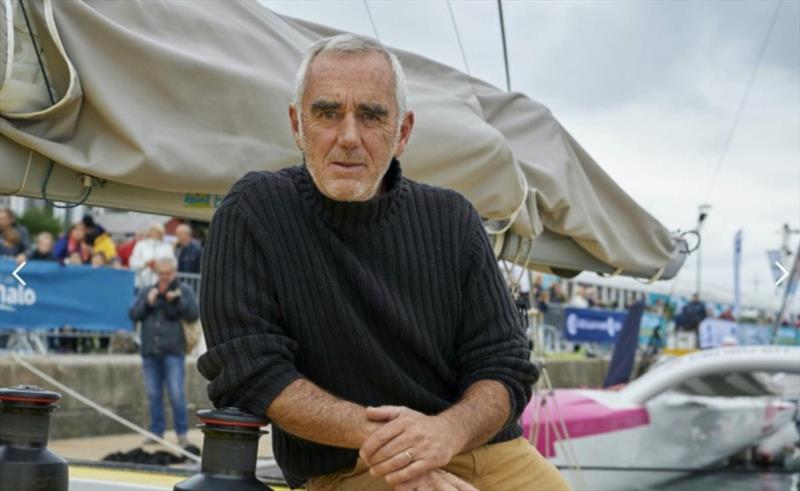 Holder has been racing multihulls for 20 years but spent much time campaigning Dragonfly and Farrier F24 trimarans before going catamaran. “We wanted a combination of things,” he explains. “The amazing thing about this boat – it is 13m, but if conditions are right you can average 18-20 knots over a sustained period. At the other end of the spectrum, we have probably the equivalent space of a 50-55ft cruising monohull, so we can also enjoy family time – we can go to Salcombe and catch sea bass and have a BBQ on board. It is very flexible machine…” When there’s enough wind (ie 13-14+ knots), Slinky Malinki can hold her own against the pro sailing elite in the upper echelons of the monohull fleet.

Holder says one secret to being competitive on fast cruising cats is to ensure they stay on a strict diet. “We constrain ourselves heavily, we don’t take too much water, so we are not showering during the race and we don’t have a watermaker. We put six beers in the fridge which we have when we finish, and we eat well – that is all part of it, keeping together a great team, being happy and motivated and we enjoy the good things. People are not having to sit in on the rail all night in the wet and the cold which is one of benefits of racing a cat like this.”

It is perhaps hardly surprising that this represents one of the top growth areas within our sport. 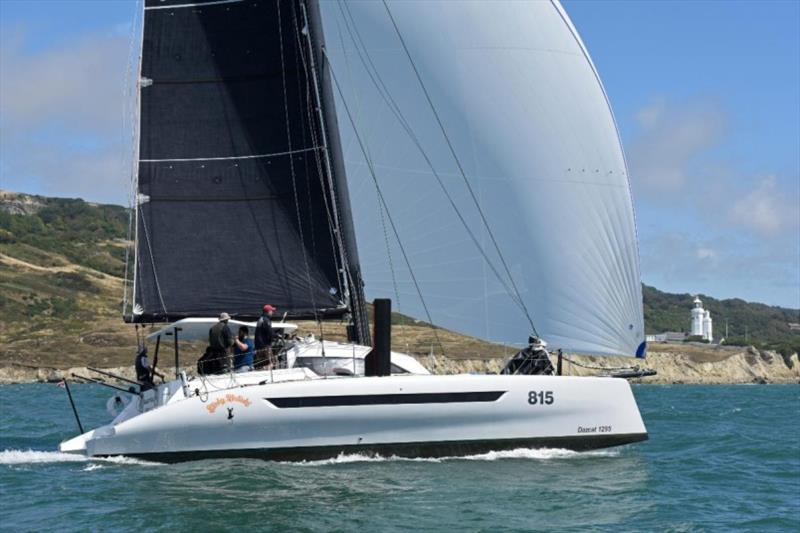