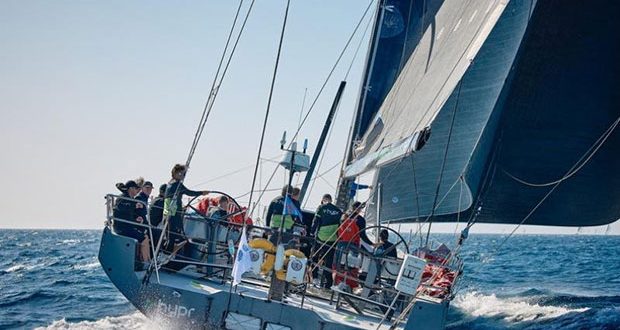 With over 30 knots of trade winds in the Atlantic, the 15 teams still racing in the RORC Transatlantic Race have seen a rapid rise in boat speed towards Grenada. 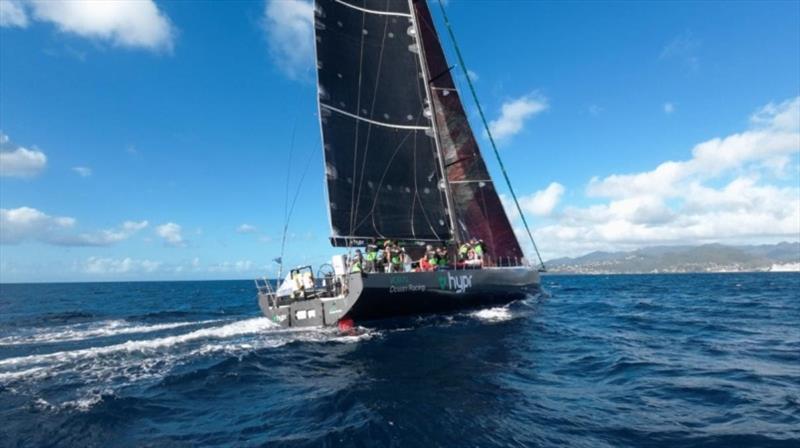 The modified Volvo 70 HYPR is the fifth Maxi to finish, completing the RORC Transatlantic Race in an elapsed time of 12 days 8 hrs 29 mins and 48 secs. The crew of 16 included the youngest competitor in the race, Filip Henriksson. The 18-year-old’s parents flew to Grenada to congratulate him. Filip’s mother was given the honour of calling the finish time by RORC Race Officer Steve Cole. 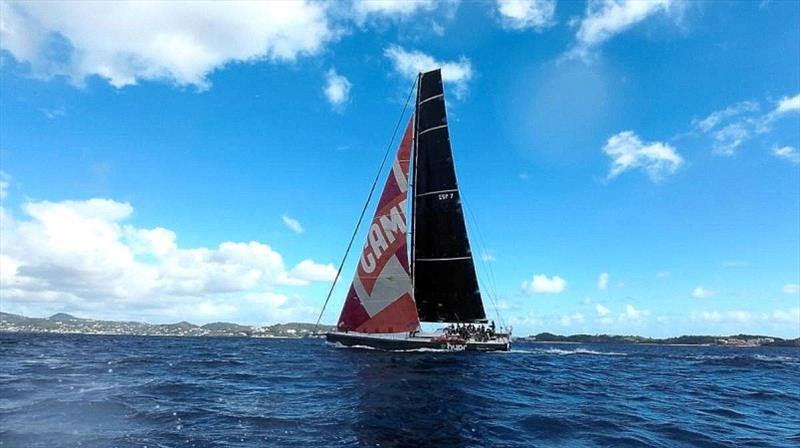 HYPR’s Jens Lindner spoke dockside: “Our finish time is very disappointing for us because the first night we broke the tack line of our A3, so we could not use the sail anymore and this was to affect our whole race. Without the A3 we couldn’t really go up north, so we tried to wiggle through the high-pressure, but we didn’t manage to keep up the speed and we lost touch with our competition. With five professional and 11 Corinthian crew, the important goal was to get here safety, and we have done that. I think they have all had a great experience and that they will be back next year. For the RORC Caribbean 600 we will be stronger with a professional crew and we hope to be really competitive. We are very happy to be in Grenada and we have had a very nice welcome here.” 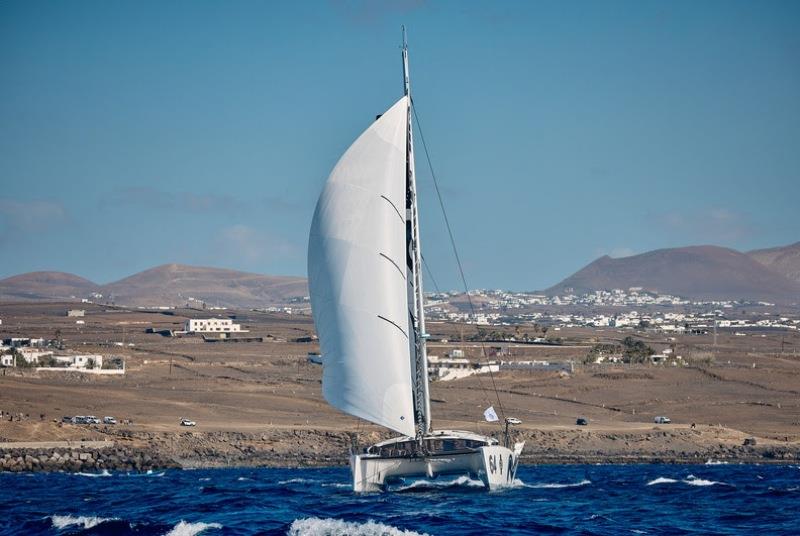 Halvard Mabire’s ORC50 GDD (FRA) finished the RORC Transatlantic Race in an elapsed time of 12 days 15 hours 45 mins 35 secs. Racing with Miranda Merron, GDD is the first Two-Handed team to finish the race. Halvard hopes to qualify for this year’s Route du Rhum and the 3,000nm race provides valuable qualifying miles and the opportunity to test the brand-new boat. 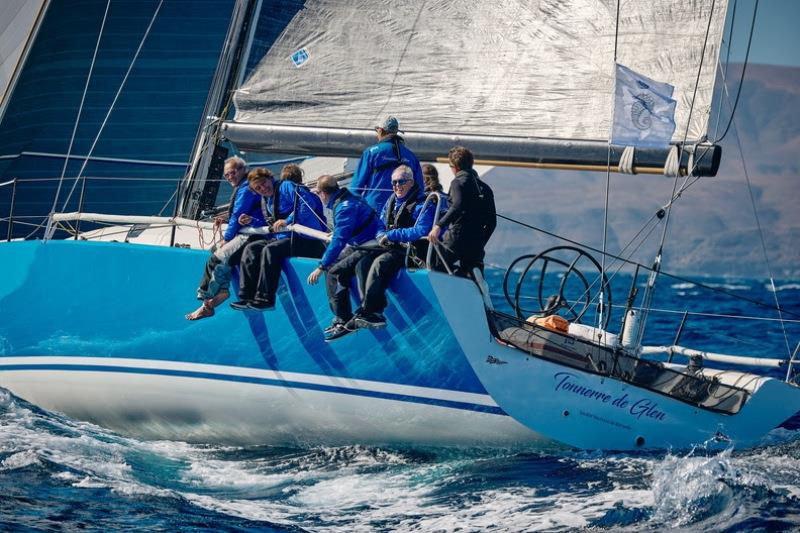 “GDD is very comfortable, perfect for an old man like me to race in the Route du Rhum solo!” joked Halvard. “GDD flies a hull easily and at times in the race we were very fast. We have also found a few areas to work on, especially the helm, but this has been a great opportunity.”

Miranda Merron is returning to Atlantic racing having completed the Vendée Globe in her IMOCA 60. Halvard and Miranda are no strangers to Grenada as they were the first Two-Handed team to finish the race in 2016 in their Class40 Campagne de France. 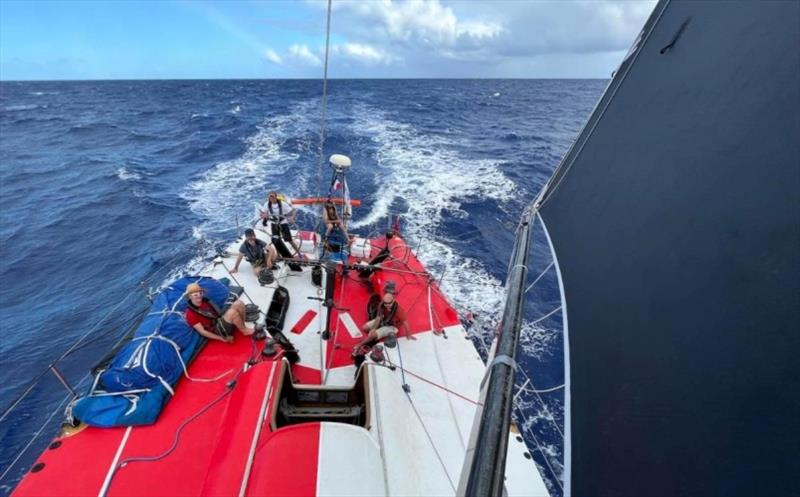 Trade winds kick in on day 14 of the RORC Transatlantic Race – Volvo 60 Challenge Ocean, skippered by Valdo Dhoyer reported: `30/35 knots from the east and a swell of 4-6 metres. Hurtling through the Atlantic swell – the speed dial goes crazy` – photo © Challenge Ocean

“This race has been quite challenging for just two people, but also quite rewarding,” commented Miranda. “Both Halvard and I are delighted to be back in Grenada. Since racing here in 2016 we have returned a few times. We are thrilled to be here. We have made friends over the years and we are really looking forward to catching up with them and visiting this beautiful island again.”

On Day Fourteen of the RORC Transatlantic Race, two more teams are expected to finish. Jean Pierre Dreau’s Mylius 60 Lady First III (FRA) will be the sixth Maxi to finish the race and the first boat from the Yacht Club de France. Dominique Tian’s Ker 46 Tonnerre de Glen (FRA) is on course to claim third place in IRC Zero. The two French teams have had a fierce but friendly battle for thousands of miles. Both teams were virtually level on the water as they approached Barbados, 150 miles from the finish. Tonnerre de Glen chose to pass to the north of Barbados and Lady First III to the south. Now, with just a few hours of the race remaining, it is impossible to tell which team will cross the line first. 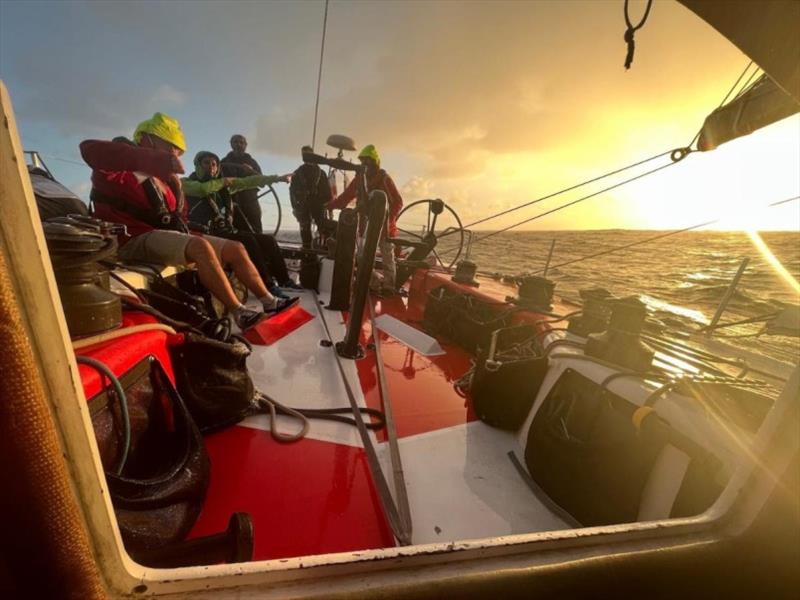 IRC One into big breeze

Reports of over 30 knots of trade winds are making for a very fast finish for the teams racing in IRC One, Ross Applebey’s Oyster 48 Scarlet Oyster (GBR) is ranked first in class, 483 miles from Grenada. Jack Pelletier’s Milon 41 L’Ange de Milon (FRA) leads the class on the water with 367 miles to go and is ranked second after IRC time correction. Richard Palmer’s JPK 1010 Jangada (GBR), racing Two-Handed with Jeremy Waitt is ranked third in IRC One. The pair have 642 miles to go, or to put it into perspective, roughly the same distance left as a Rolex Fastnet Race, after 14 days of racing. 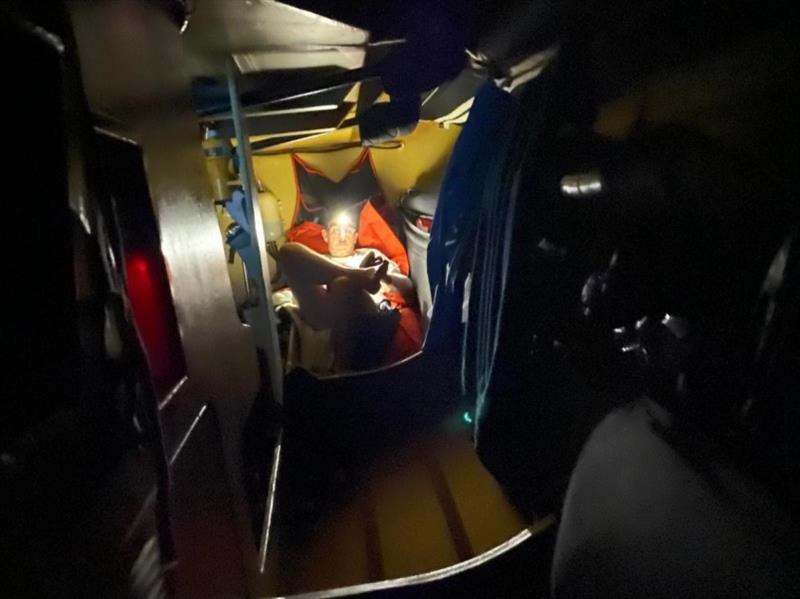 Richard and Jeremy contacted the RORC Media team from on board Jangada: “The past 24 hours have been lively, gybing downwind, picking up shifts between the clouds and gusts of up to 30 knots and rain. Jangada remains fast, but safe and manageable in the stronger winds. We are disappointed to see that our rivals are pulling ahead. Sadly, for us they simply seem to have more breeze judging by the boat speeds and we are struggling to keep up. On a positive note, we have been treated to some spectacular rainbows.” 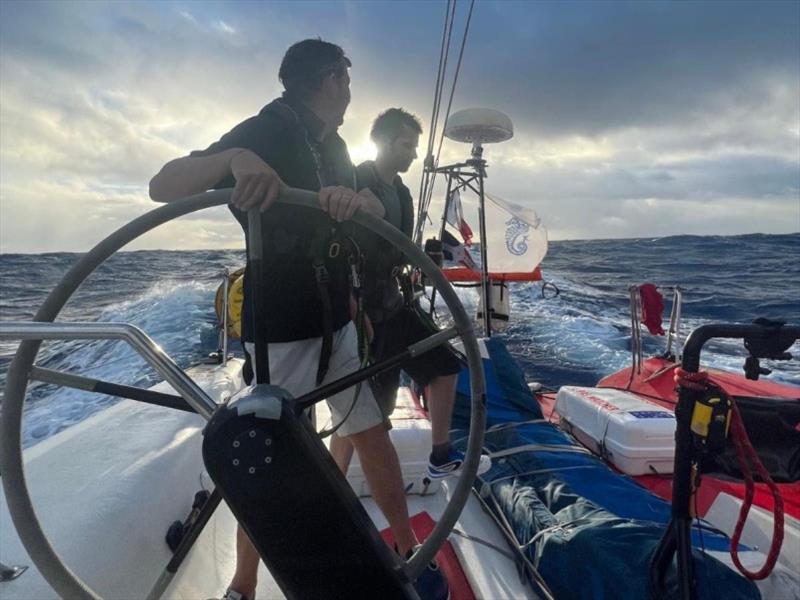 News in from Volvo 60 Challenge Ocean, skippered by Valdo Dhoyer: “A night of long knives for this 13th night racing in the RORC Transatlantic Race. The trade wind is in, with 30/35 knots from the east and a swell of 4-6 metres. Hurtling through the Atlantic swell the speed dial goes crazy with the adrenaline rising: 15, 16, 17, 18, 19, 20kts and you have to hold on, keep the boat on course with a fine line at the risk of broaching. Less than 400 miles remain; finishing is the crew’s first objective. The rest will just be bonus.” 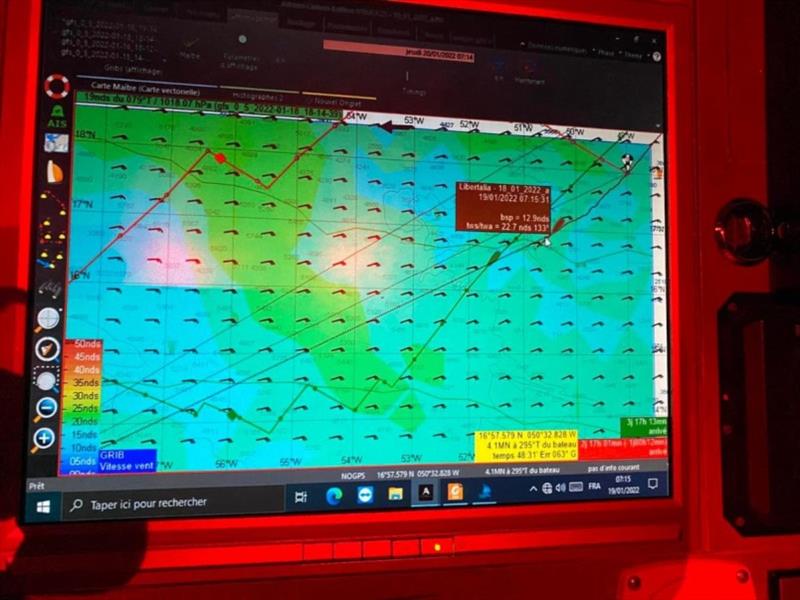 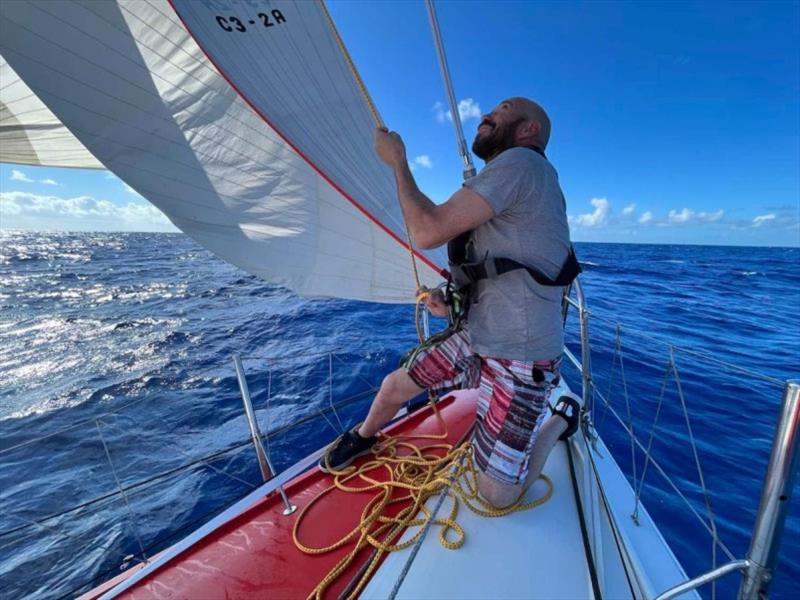 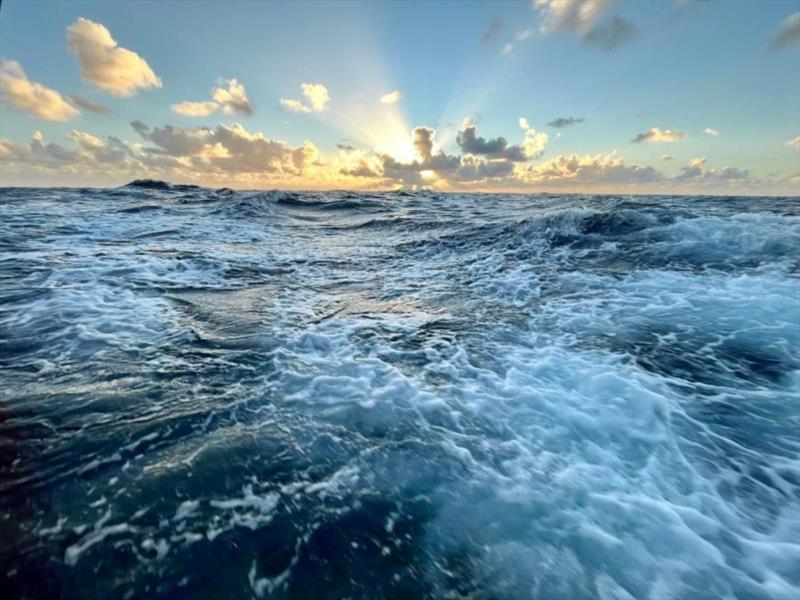 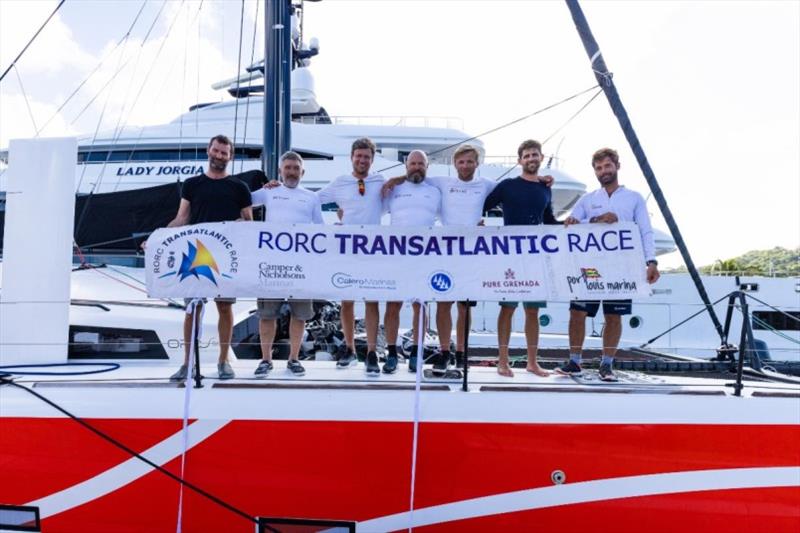 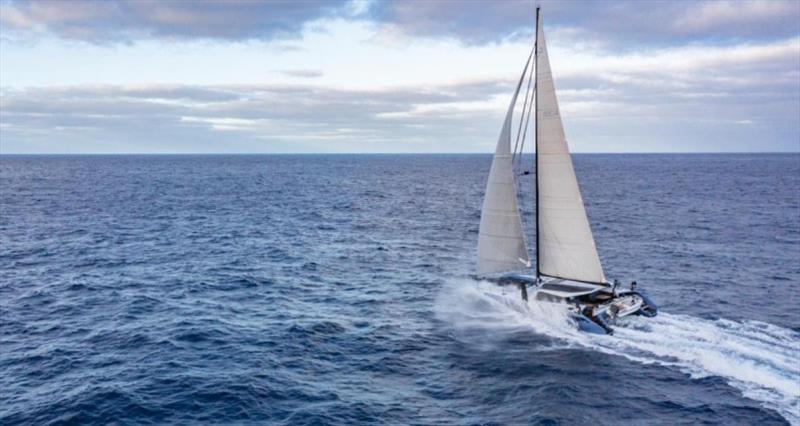 Meanwhile, some great drone shots are in from Gunboat 68 Tosca, sailed by Ken Howery/Alex Thomson. After their pitstop in the Azores, they are now over halfway to the finish in Grenada – photo © PKC Media / Tosca 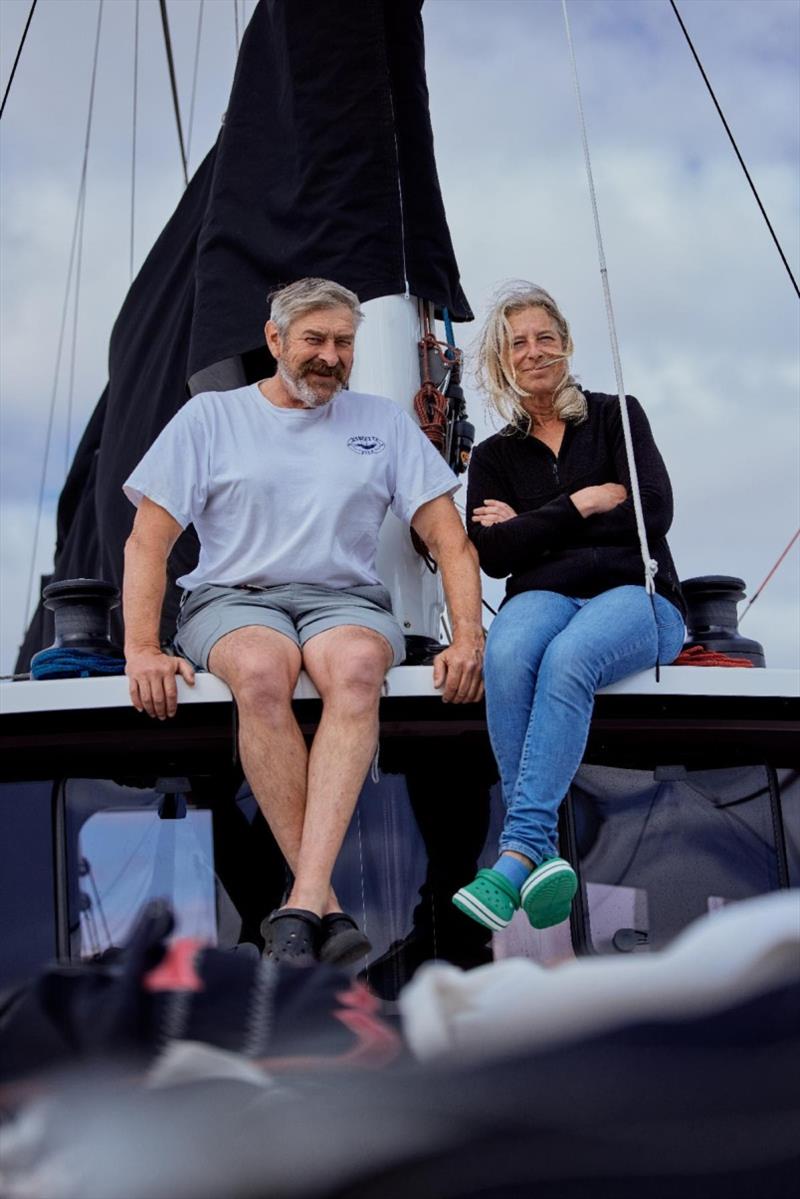 Miranda Merron is returning to Atlantic racing having completed the Vendée Globe in her IMOCA 60. – photo © RORC