The 2020-2021 NSW Championship continued to produce some of the best 18ft Skiff action seen on Sydney Harbour for several seasons when the defending champion Winning Group team of John Winning Jr., Seve Jarvin and Sam Newton hung on grimly to score a narrow win in Race 4 of the championship today.

After grabbing the lead at the start, the Winning Group led for the entire course but had to hold off a strong challenge from the Finport Finance team of Keagan York, Phil Marshall and Matt Stenta, to score an exciting 4s victory in the light ENE wind.

After each team discards its worst race, tech2, with a total of two points, retains a narrow lead in the championship with two races still to be sailed.

Winning Group is just one point behind tech2, followed by Finport Finance on six points. Dmeg and Andoo are tied on seven points, The Oak Double Bay-4 Pines is on eight and the Spring Championship winner, Yandoo (John Winning) is seventh on ten points.

The race was difficult for all teams as the breeze fluctuated between the East and ENE, sending the skiffs off in various directions on the spinnaker runs from Beashel Buoy to the wing mark off the southern end of Shark Island.

Shortly after the start the left hand side of the course proved to be the way to go as Winning Group led from the young Vintec team, led by Tom Cunich, Andoo, The Kitchen Maker-Caesarstone (Jordan Girdis) and Rag & Famish Hotel, Anthony Young.

As the fleet approached the first windward mark off Beashel Buoy, the fleet on the right hand side of the course picked up an Easterly breeze and the fleet quickly bunched behind the leader.

The following spinnaker run to the wing mark put the teams’ boat handling skills to the test as the wind direction fluctuated and went more to the east as the crews battled to control their big spinnakers into the Rose Bay wing mark.

The Oak Double Bay began to pressure Winning Group on the run between Shark and Clark islands while Finport Finance also started to move through the fleet into third place at the bottom mark. 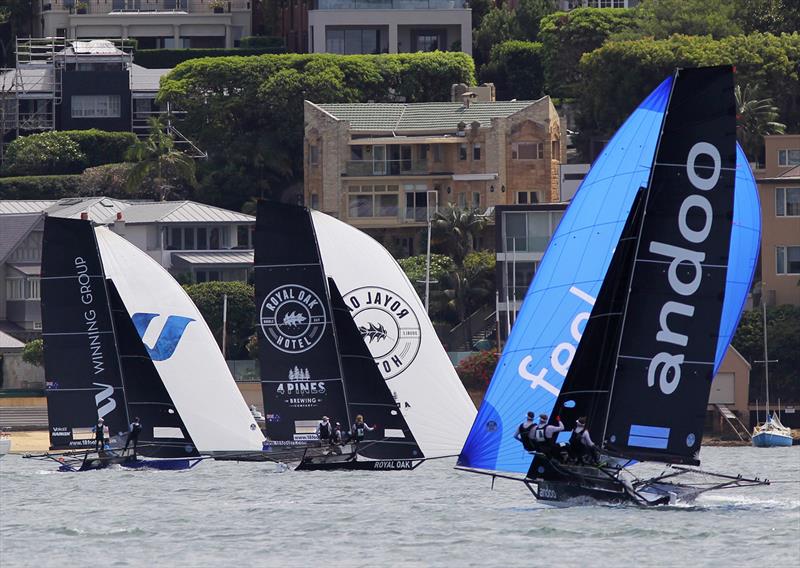 As the breeze fluctuated in direction the positions in the fleet also changed quite dramatically.

On the second beat to windward, Winning Group went to the RHS of the course to cover the Finport Finance threat and held a healthy 30s lead over Finport at the Beashel Buoy. The Oak Double Bay-4 Pines was just 7s further back, but the trio had opened up a break over the rest of the fleet.

Finport edged closer to the lead at the bottom mark but was still 20s behind Winning Group at the Beashel Buoy on the final lap of the course. 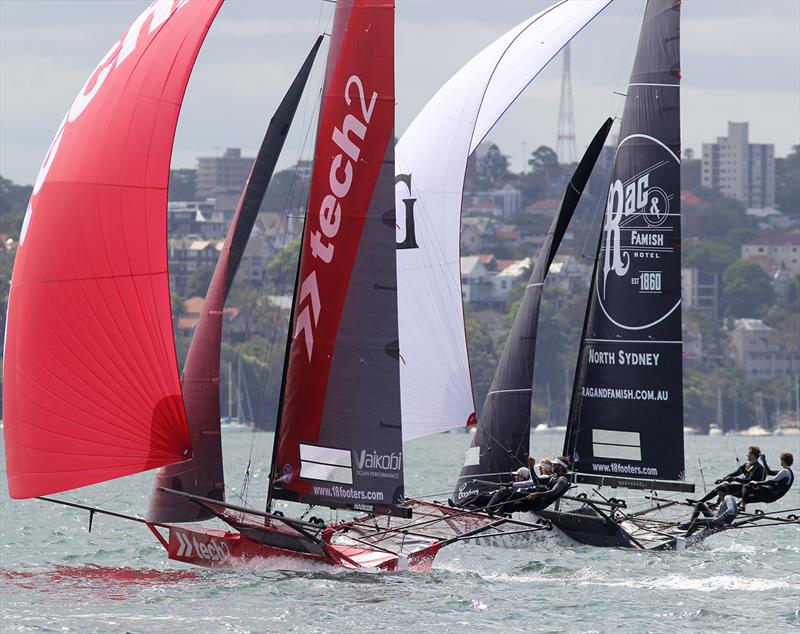 The two leaders had the same problem with the easterly angle of the breeze as they headed into the Rose Bay wing mark, and this set up a great battle to the finish on the final run between the two islands.

With less than 50 metres to go the race was still in the balance and it was a great credit to the skills of both Winning Group and Finport Finance as they raced bow-to-bow across the finish line while the crowd on the spectator ferry cheered for their ‘favourite’.

While the race for the victory was exciting, the battle through the fleet was just as interesting with positions constantly changing over the entire course.

Racing will now go into recess over the Christmas-New Year period. It will resume with the final two races of the NSW Championship being staged on January 10 and 17,

Race 5 of the NSW Championship will be conducted when racing resumes after the Christmas-New Year break, on Sunday, December 13.

Spectators can follow the racing on board the club’s spectator ferry, however due to the COVID-19 policy, numbers are limited. Booking online through the club’s website www.18footers.com is essential. www.18footers.com.au/18-footers-sailing/spectator-ferry

For those unable to make it out onto the water, AeroMedia Live Broadcast team will be on Sydney Harbour to capture all the action. Live streaming is available at www.18footers.com by clicking on the ’18 Footers TV’ link.