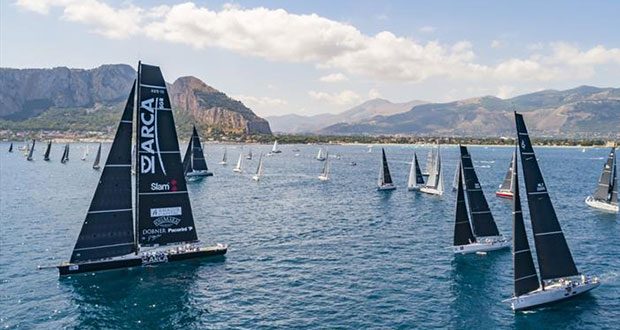 Under a full moon just before the clock struck midnight last night, the 100ft grand prix maxi Arca SGR ghosted through the finish to claim line honours in the Palermo-Montecarlo race, the fifth and concluding event of the International Maxi Association’s 2020-21 Mediterranean Maxi Offshore Challenge.

Organised by the Circolo della Vela Sicilia, in collaboration with the Yacht Club de Monaco and the Yacht Club Costa Smeralda, the 16th edition of the Palermo-Montecarlo set sail from the Golfo di Mondello on Saturday at 1200.

The 437 mile course then took the fleet across to the YCCS gate off Porto Cervo, then continuing on to the Montecarlo finish, either passing through the Strait of Bonifacio and leaving Corsica to starboard or on the slightly longer route – sailing up Corsica’s east coast then crossing from the famous Giraglia rock.

Palermo-Montecarlo is renowned for being one of the most tactically challenging offshore races in the Mediterranean. In this respect, it certainly delivered this year, with varied wind conditions including flat calms to the Mistral providing 30 knot headwinds as it funnelled through the Strait of Bonifacio.

Arca SGR, a 100ft grand prix maxi that in a previous life won line honours in the 2003 Rolex Sydney Hobart as Skandia, was the scratch boat among the 46 starters, which included six 60+ft maxis. This followed her winning line honours into nearby Genoa in June’s Rolex Giraglia. On that occasion as this, she was entered by Monaco-based Italian Guido Miani with a crew led by Trieste legend Furio Benussi, and a strong line-up including tactician Lorenzo Bressani and Nacra 17 Olympian and World Champion Vittorio Bissaro.

En route to the YCCS mark, there was an area of high pressure over southeastern Sardinia which kept the fleet offshore. During the first night as the leaders were half way the wind backed and Arca SGR, alone, had chosen to tack out to the east hunting better pressure as her competition stuck closer to the rhumb line. Arca SGR initially benefitted, but when she reached the YCCS mark just before 0100 on Sunday morning, the chasing pack had closed again with Carlo Alberini’s Davidson 69 Pendragon VI and Andreas Verder and Arco Van Nieuwland’s Marten 72 Aragon following at roughly 0235 and 0245 respectively.

Despite the Mistral, the leaders were able to get up the La Maddalena archipelago’s Bomb Alley and through the Strait of Bonifacio almost on one tack before having to beat up the coast of southwest Corsica. Eventually the breeze backed allowing some fast miles to be made at last before they had to endure the usual night-time park-up just short of the finish line off Montecarlo’s famous Porte Hercule.

After mooring up outside the Yacht Club de Monaco Guido Miani expertly wielded a sabre to chop the top off the victor’s champagne bottle, duly spraying the crew. Miani previously won the 2007 and 2008 editions of this race aboard his lengthened Grand Soleil 56 Out of Reach. This was the first time he had won line honours. For Miani his sailing is a family activity, established by his father Adalberto, who recently campaigned the Advanced 66 Botta Dritta. Among Arca SGR’s crew this time Guido Miani’s son and nephew. 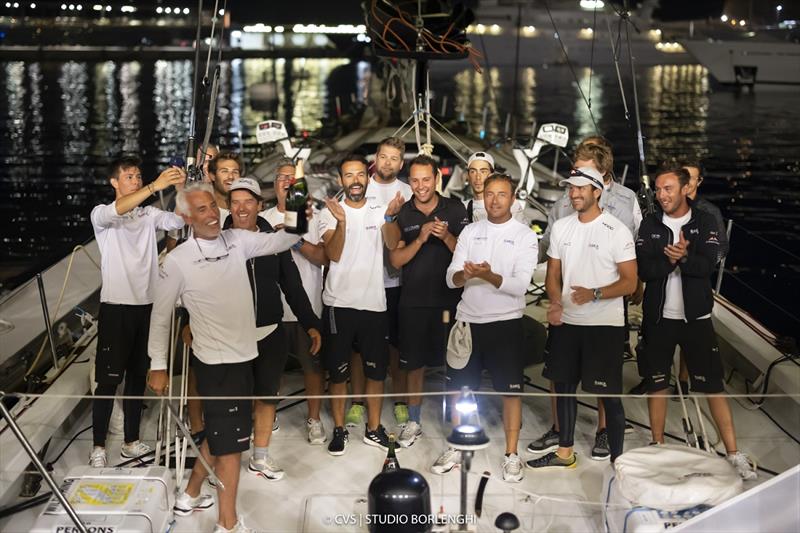 “It was an interesting race in different conditions,” said Guido Miani of this year’s race. “The first 50% was beating upwind, then we got 30 knots in the Strait of Bonifacio. We didn’t have any problems and the boat was fantastic and the crew did a great job in keeping the boat in good shape. We didn’t have any problems. This boat is amazing – normally she sails much faster than the wind. It is really impressive – the perfect kind of boat to do this kind of race in.”

Skipper Furio Benussi was also part of the previous winning Out of Reach crew and reckoned he has sailed this race six or seven times. “This was a long windward race! We never used the kite,” he mused of this edition. “It was quite frustrating and really hard because we had many, many different conditions – light winds on the first day and then strong wind off Bonifacio an also in the first part off Corsica – 30 knots and really choppy with high waves, a cross sea. We passed through the Strait with one reef and the J6 – we have never used that before!”

As to whether Arca SGR will do well in the overall results under IRC corrected time remains to be seen. “We have to wait until tomorrow,” continued Benussi. “For us it is really important to win line honours – that was our goal.”

The battle for the second spot on the line honours podium remained close throughout the race with Pendragon VI and Aragon at each other’s throats- the former a shorter grand prix racer, the latter a newer racer-cruiser including a few French sailing stars such as America’s Cup winner Thierry Fouchier. 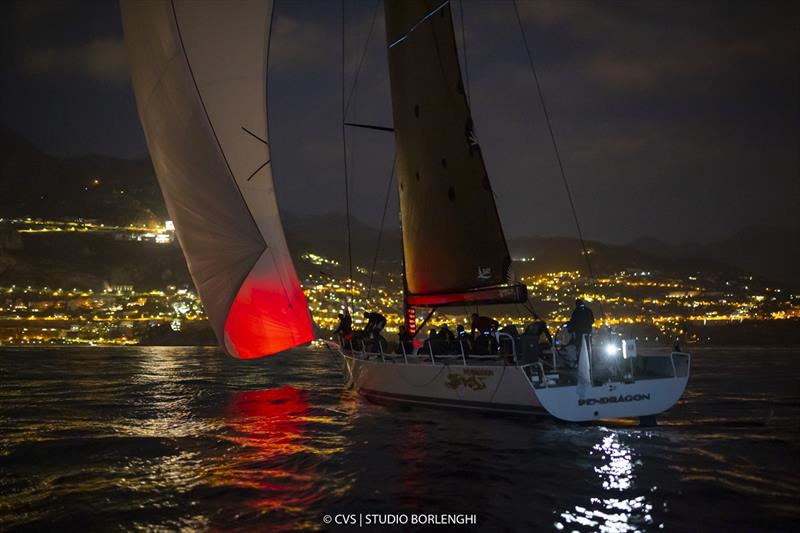 Pendragon VI remained a nose ahead for the majority of the race, however briefly while beating up the Corsican coast Aragon took the lead. Eventually, despite Aragon taking a small easterly flyer towards the finish, shorter rival prevailed, arriving just 15 minutes ahead.

For IMA member Carlo Alberini, an accomplished inshore one design sailor, this was his first Palermo-Montecarlo. “It was very interesting because the wind was up and down, stop and go, especially on the approach to Porto Cervo. It was fantastic the sailing along Corsica in the strong wind making 13-14 knots. The race is very interesting- I encourage other racers to do it.”

The enthusiastic largely Dutch crew on Aragon enjoyed the race very much, despite being unable to beat Pendragon VI on the water this year – she had beaten her (when she was Adelasia di Torres) by just two and a half minutes in 2019. 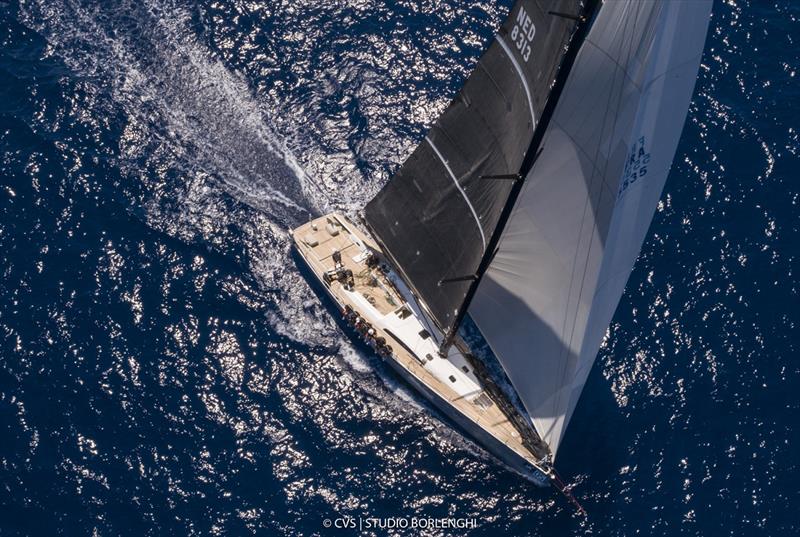 “It was very mixed, even from the start,” said co- owner Andreas Verder, recounting how they had dipped the fleet on port at the start.”It was challenging but the result was good. We had nice breeze and managed to sail a straight line until Porto Cervo. Pendragon took the same route. We went through the Strait in the Mistral, but it was fine – we have been through a lot worse in the Rolex Giraglia and RORC Transatlantic Race.”

They lost 30 minutes fixing a broken strop holding the tack of their jib and then got stuck in a hole off the Corsican coast. “Then we had a good sail until we got to five miles from Monaco… It was the same two years ago when there were three of us trying to get to the finish.”

“This is not a boring race at all!” continued Verder, who also co-owns a Southern Wind 94 called Aragon. “There was less light wind that normal – 90% of the time it was sailable and through the Strait we had a lot, so it was an excellent mix. This is a great race, plus we like Palermo and the contrast of arriving in Montecarlo.”

Among the other maxis competing, Leaps & Bounds, the Mills Vismara 62 campaigned by Belgian Jean-Philippe Blanpain was fifth across the line this morning at 08:09:57.

At present under IRC the big boats do not appear to have faired well. Among the maxis, the leader at the YCCS gate off Porto Cervo was Aragon followed by Leaps & Bounds 2 and Pendragon VI.

The winner of the IMA’s Mediterranean Maxi Offshore Challenge for 2020-21 will be announced and presented with their silver trophy during the IMA owners’ reception at next month’s Maxi Yacht Rolex Cup in Porto Cervo.