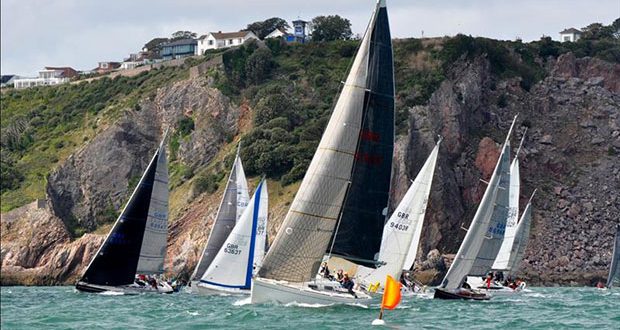 Organised by the Royal Torbay Yacht Club, the Torbay Royal Regatta is normally a three-day festival of competitive racing over the August bank holiday weekend.

Given the circumstances this year, there were doubts about any event at all, but when restrictions were eased at the end of July, Sailing Secretary Bob Penfold decided to try and run a reduced regatta: “We decided to go for two days only, on 22 and 23 August.

Part of the purpose of this was to cut the number of volunteers we needed, because three of our five Race Officers are currently shielding, and quite a lot of others who normally operate RIBs are not able to do so at the moment.

“By sticking to yachts and sportsboats only, we could minimise the number of support people required out on the water; we had just two people mark-laying, distanced on the RIB and wearing face coverings, and they had to do just one tow-in. We also reduced the number of people on the committee boat to five, including one couple, and again, they were all distanced.”

The organising team ran no registration, so avoiding the need for people to sit opposite each other, and there was just a limited race office, with reduced hours, all done through the club’s main office with a screen between participants and those at the desk. Sailing instructions and the Notice of Race included clear referrals to both government and RYA covid-19 online guidance.

The weather for the event was good, with gusts of over 25 knots on the Saturday. As a result, there was a full weekend of racing, and it was very competitive, especially in the sportsboat classes. There were eight entries in the cruiser fleet, following the SWYTC handicap system, eight entries in the IRC yacht fleet, and 11 sportsboats. Some were crewed by family bubbles, while others, being larger, were socially distanced and, where necessary, using mitigation such as masks according to the guidelines. Participants were largely club members, though there were a few boats from further afield.

Prizegivings were in the terraced garden of the club with people well spaced-out and a one-way system. The prestigious Addison Gold Cup was this year presented for the highest placed yacht with a predominantly female crew (to encourage more female participants) and from four entries in this category, the winning boat was ‘Hope’. The Torbay Admiral’s Club was for a team comprising a boat from each class, putting all their points together. Again, there were four entries and the winning team was ‘Fast and Furious’, made up of winning boats ‘New Moon II’, ‘Juno’ and ‘Excellent’. Overall winners were Paul Craft ‘Mini Mayhem’ (IRC Class), Steve Birbeck ‘Mildly Moist'(Sportsboats), and John Pollard ‘Excellent’ (SB20s) and James Clapham ‘Crikey’ (Cruiser Class).

Members were very happy with the event, commenting extremely positively. One crew messaged afterwards: “We had the most amazing weekend sailing. It’s such a treat to see all of you again after such a prolonged time off the water. Thank you to everyone involved with the organising for all their efforts – it’s hugely appreciated, especially with the extra challenges to navigate this year. Well done!”

The dinghies and juniors have not been forgotten, however, as Bob explains: “Not including them buys us a bit more time in the hope of further guidance for dinghies. We’re planning to hold a separate event for them on the first weekend of October, so that we can spread our volunteer resources effectively.”

For more information about getting back to the water visit www.rya.org.uk/programmes/Pages/return-to-boating.aspx