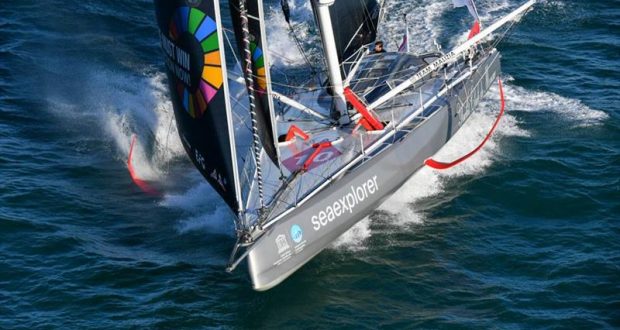 Thomas Ruyant (LinkedOut) has taken the lead at the head of the 32 boat Vendée Globe fleet on the early morning rankings today as the breakaway top trio enjoy a fast slide south eastwards towards the Southern Ocean.

Being in first place on the rankings will be a pleasing moment for Ruyant, the 39 year old skipper from the north of France who had to abandon the 2016-17 race, and for his very supportive group of investors from his home region who financed the build of his boat.

LinkedOut made 511.4 miles over the 24 hours to 0400hrs TU this morning. The leading trio now have a gap of over 200 miles ahead of a group of seven IMOCAs which Jean Le Cam tries to keep under control. But at the front of the fleet the battle is set to become more intense late tomorrow as the leaders start a sequence of manoeuvres which will almost certainly decide who gets to the Southern Ocean first. And so, with this ahead, it is vitally important over the next hours to stick to a routine which maximises sleep and builds energy for the next pivotal phase. 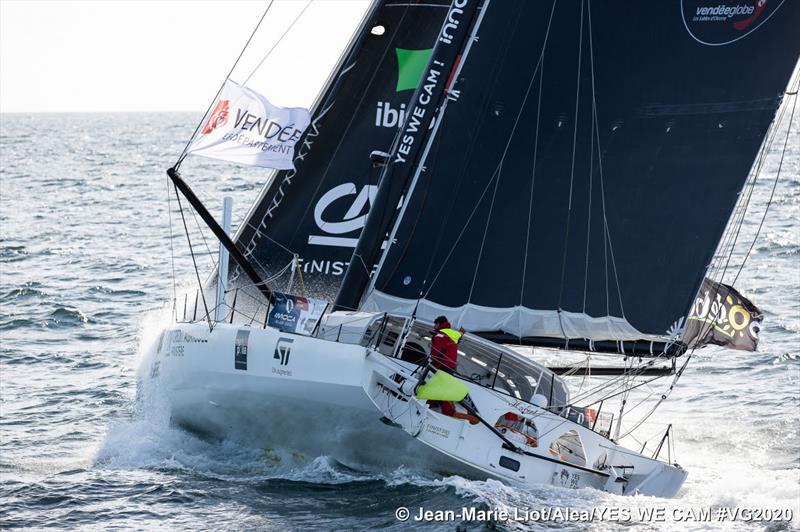 Ruyant, second placed Alex Thomson (HUGO BOSS) and Charlie Dalin (Apivia) in third, who also dropped miles overnight know only too well that this stage of the descent down the South Atlantic is all about positioning for the medium to long term.

After five days on top of the standings this morning Thomson will not be too concerned to see the Frenchman lead the rankings. Yesterday the British skipper confirmed he is sailing his own race as much as possible, biding his time for when the particular strengths of his boat should prevail. He will take more store from the fact that all three boats are very closely matched in speed and he and rival Ruyant are neck and neck in terms of latitude.

Woken from what he confirmed is a regime of regular naps – achieved despite whistling along at 20-23kts – Ruyant may have been drowsy and did not know he is leading, but nonetheless was on point “It is getting out of hand! It’s stimulating but at the same time we put a lot of pressure on each other. I’m happy to be where I am, in the top three, you have to be here right now, it’s important not to be behind ”

Between yawns this morning at 4am he noted “The situation is quite classic but also not easy to negotiate. The wind corridor under the Saint Helena high does not go all the way (south). What is certain is that you have to just jump in there, try to knit it all together as well as possible. From the end of the day tomorrow, there will be a lot of manoeuvres, we will get into the tough bit.” 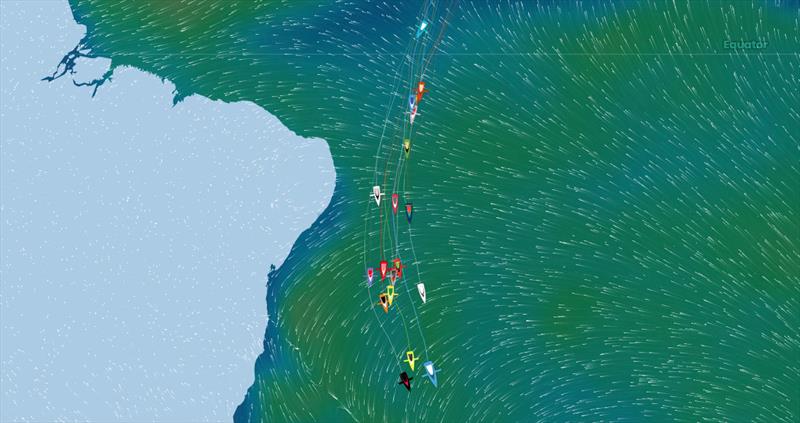 Behind them the southbound train of boats stretches back across the Equator to the Cape Verde islands. With 13 days of racing since the start and more then 20000 miles still to sail the feeling for the rookies can, at this stage, feel quite overwhelming, almost like a kind of vertigo. Since they crossed the Equator the IMOCAs sail on a relentless, monotonous port gybe in SE’ly trade winds, trimming the sails but not making any changes in direction or manoeuvres, An almost monotonous aspect for Maxime Sorel: “I’m not used to it, we will be on this same tack for several days. It’s the first time that I’ve been on the same tack for so long. I think this is a stage of the Vendée Globe when I now start to realize the real duration of the race. ”

Benjamin Dutreux, the 30 year old rookie from Ile d’Yeu – just offshore of Les Sables d’Olonne, – who dreamed of racing around the world since he was a child, is in the same state of mind but makes the most of his 11th position in the fleet racing neck and neck with Damien Seguin on Apicil. Neither have been south of Salvador de Bahia: “The South American coast is immense! We’re going to stay on the same tack for a long time for sure, but I have Damien fighting with me. The game is fun, as long as it lasts!. ” Dutreux said at 4 o’clock this morning between bites of chocolate muesli and ready to cook his last egg.

“It is good, it is stimulating and at the same time we are putting pressure on ourselves, the boats are obviously close on speed and on every ranking. But it is typical of the South Atlantic and the race to get south but it is important to be going well at the moment but I am working hard to catch Alex who was well ahead in the North Atlantic so to be at the stage and be close is good. I am happy.

It is classic with the front but at the end of it it is not easy to to negotiate. The models are not entirely agreeing in what happens but there will be a lot of manoeuvres to come from the end of tomorrow, that will be quite hard.

Initially it was about getting the best angle since getting out of the Doldrums and obviously I set a route but I have had a good angle and good winds all the time and I think all the time maybe Alex has had less wind and certainly during the early part of the descent of the South Atlantic.”