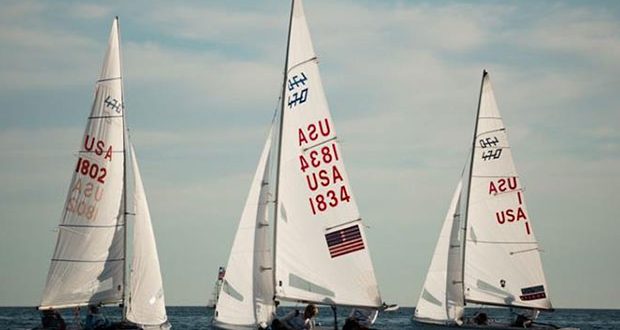 Biscayne Bay was gifted with a late afternoon breeze and four fleets got in some nice racing on day one of racing at 2021 West Marine US Open Sailing – Miami.

The Nacra 17, 49er, 49erFX, and Mixed 470 fleets were fortunate to get in racing on a light wind day. The IQ Foil and Open Windsurf Foil fleets will aim to start their racing on Friday.

Sailors hit the water at approximately 2:30pm with the goal of racing by 3:30pm. The four fleets completed two tactical light air races each in about 5 to 6 knots, with the wind blowing south at 180-190 degrees. 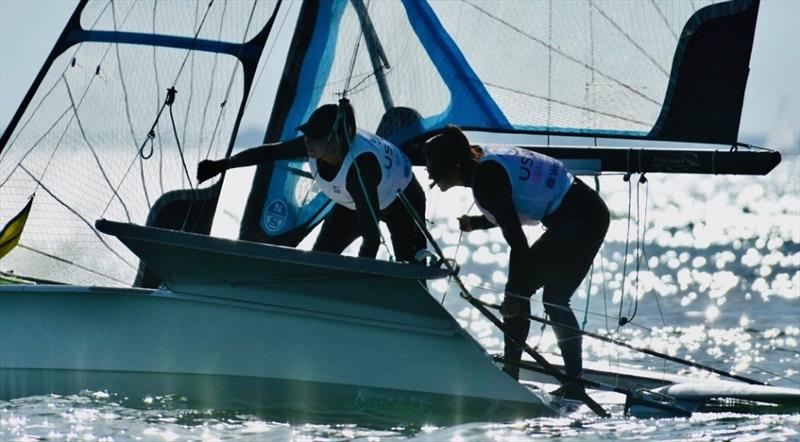 Erika Reineke (Fort Lauderdale, Fla.) made her racing debut in the 49erFX with Lucy Wilmot on Thursday. The new duo discussed the 49erFX as well as Erika’s transition to a new class and doublehanded sailing.

“I was thinking about a change after so many years in the Radial,” said Reineke. “I wasn’t really sure what that was going to be, then I got a call from Lucy and we came down here and trained together. I fell in love with the class and sailing with her. That’s what got me into it.”

Wilmot spoke about their training and where they are in the process. “Our focus this fall was on boat handling around the course in all conditions. More recently, with our new set of sails, we got more into dialing speed and the rig, and we are hoping with the 2021 rig coming out, we can get into the technical side and solidify that.”

“This has been on the calendar since we decided to sail together. We were excited about all the domestic training leading up to this. It’s been awesome having all the American sailors here in the boat park and being able to collaborate. It’s been great getting to know everyone and make new training friends. This is what’s all about,” said Wilmot.

470 sailor, Micky Munns spoke about the 470 and how it has suited him well in his transition to the boat. “In the 2016 Games, the boat that really strongly resonated with me was the 470 with Stu [McNay] and Dave [Hughes], and Annie [Haeger] and Briana [Provancha],” said Munns. “The 470 is known as a technical boat, but it’s not crazy complicated. A lot of the systems you set up. I realized recently why all the controls are right near the skipper, it’s because you have to play with them all the time, and so we are getting the hang of that.”

“The 470 relates to all my learning in terms of grassroots sailing in FJs and 420s to college sailing,” added Munns. “The 470 is one of the strongest connections to grassroots sailing there is. All the skills are transferable to other kinds of sailing.”