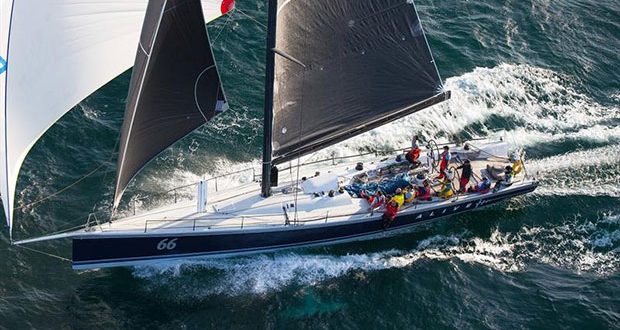 San Diego Yacht Club and Santa Barbara Yacht Club are proud to co-host their signature offshore race of the summer, the SoCal 300, the Southern California leg of the California Offshore Race Week.

The California Offshore Race Week has been a premier offshore California regatta series since 2015 and is made up of three different races:

The 2021 California Offshore Race Week will be the 5th edition of this great series that combines these three offshore sailing events.

Prior to the launch of the SoCal 300 in 2015, the two existing events in Northern California, the Spinnaker Cup and the Coastal Cup, were standalone races. After seeing the popularity of the SoCal 300, there was growing interest in all three races being held in sequence. In 2016, it was agreed upon to combine all three races into one intense week of sailing down the coast. Indeed, it is a bucket list trek down the coast starting in San Francisco with stops in picturesque Monterey Bay and Santa Barbara and ending in San Diego. For sailors wanting to limit their racing and stay closer to home, each of the individual events still provides plenty of offshore adventure.

California Offshore Race Week continues to see growth in entries and returning sailors. As for the SoCal 300, the 2021 entry list of nearly 40 boats is the biggest in the race’s history. This year, the event will be scored as a single race from start to finish, doing away with the four leg score format the event had in the past. “While it was a great concept, the way the ratings worked out, the same boats that won the contest were typically winners on each leg as well. Not that the winners didn’t deserve lots of praise, but it seems a little overkill,” shared Jeff Johnson, Race Director at San Diego Yacht Club and Race Officer for SoCal 300.

Returning for this year’s SoCal 300 is Michael Moradzadeh sailing his Santa Cruz 50 Oaxaca. Moradzadeh took first in the ORR-C class in the 2019 event. “The challenge of sustained multi-day racing is rarely available to west coast racers. This race, in warm waters, provides a great opportunity. It’s important to be knowledgeable on navigation and weather, of course, but it is equally as important that the crew stays engaged, alert, and active all the way through.” Moradzadeh, like many others, has had a slight sailing lull this year due to the pandemic, but is hoping for a decent performance and a place back on the podium.

Another competitor in the SoCal 300 is John Raymont sailing his Ker 51 Fast Exit II. Raymont has sailed the SoCal 300, finishing first in class and second overall in the 2019 running of the event. “The SoCal 300 course is the sole local event that takes boats 100-nm offshore into the ‘real ocean.’ This includes waves and wind not found in coastal races. In 2018, winds were mid-30’s, so no spinnaker was flown, but the boat was hitting 18-knots on the long leg to the virtual mark. In 2019, we had near 30-knots on the long leg to the virtual mark and flew our A3, passing all other boats except the largest leading boats. This year, we’re coming in with a strong passion to win, but safely executed in a seamanship manner respectful of the sea.”

The 2021 entry list welcomes over a dozen first time entrants to the regatta.

Rudolph Hasl, sailing J/145 Palaemon, recently came in second in class in SDYC’s Yachting Cup. This is the team’s first SoCal 300, but they have participated in SDYC’s old Bishop Rock Race, which had a similar course. Hasl provided insight on what type of preparation goes into an offshore race like this. “It is critical to prepare mentally for this type of race by making sure the logistics are thought through, by having crew members who are comfortable with the challenges of nighttime sailing, by making sure that the crew schedules are arranged to provide for rest time, and to make sure that we have the sails available for the variety of wind conditions we may face. For the race itself, creating a team is critical. The boat needs a team that enjoys working together and knows the boat and its sailing conditions very well. We all need to depend on one another during a race of this nature. We need skilled drivers and trimmers. We need the crew to be able to adjust during the race to the changing conditions, including sail changes and the ability to take care of problems that are likely to arise.”

Twenty-two out of the 38 current entries are also registered to sail in this summer’s Transpac Race. One of which is Chris Sheehan’s team sailing the Pac52 Warrior Won (previously BadPak). Speaking for the team is Collin Leon. “This is my first time doing the SoCal 300. Our team is looking forward to getting some great training conditions for the Transpac Race along with some solid competition. We have put a lot of time in over the past year into crew work, sail plan and boat optimization. Our big challenge will be to put all of those components together so we can race as efficiently as possible. While Transpac will be more of a marathon and less of a sprint, the SoCal 300 serves as great preparation.”

During each stop down the coast, there will be skipper’s meetings held prior to each race and a mandatory check-in. Each club participating as a finishing location will hold their own awards ceremony. The SoCal 300 ending at San Diego Yacht Club, will host an awards ceremony for the SoCal 300 and the entire CORW series as it is the final stop for the week.

The entry deadline for the SoCal 300 is May 29 and all registrations must hold a valid 2021 ORR certificate.