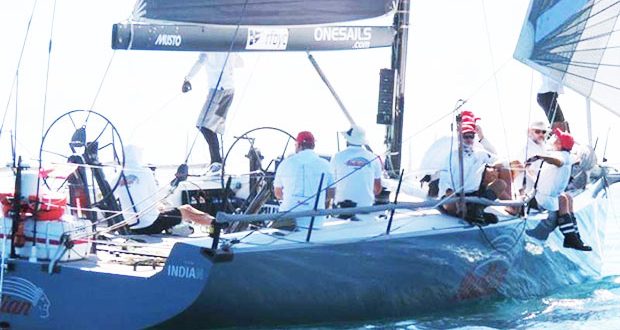 Indian and Enterprise NG, the two leaders in Fremantle Sailing Club’s Fremantle to Exmouth Race and Rally, lay becalmed off Coral Bay this evening, having covered 600 nautical miles of the 700 mile course.

Indian’s performance last night and this morning was exceptional, converting a 6 mile lead yesterday into a 30 mile lead today, but even Indian could not maintain her speed as the breeze slowly died this afternoon.

Mark Nagle’s team on Weapon of Choice, some 90 miles back from the leader, may have been smiling as they started to close the massive gap in steady breeze.

Today’s hard luck story belongs to James Halvorsen’s GiddyUp, which has Fremantle Sailing Club’s commodore Ron Greer in its crew. The yacht’s tracker showed some abnormal activity overnight so the race control team made contact with them by satphone.

The yacht reported rigging problems, which they hoped to resolve by sailing into the shelter of Steep Point, but it was discovered that the yacht’s steering system was compromised. The crew deployed their emergency tiller, sailed to Denham to take on more fuel and called race control to request a change of status from the race fleet to the rally fleet. All crew are well.

Stiff competition continues between Al Fresco, Checkmate and Obsession but with Indian now showing up as the handicap leader on computer predictions, they will be hard pressed to make up the leeway unless their breeze holds up while the leaders continue to struggle.

The tailenders, The Edge (race fleet) and Kailana (rally) are now well along the Zuytdorp Cliffs and making good progress.