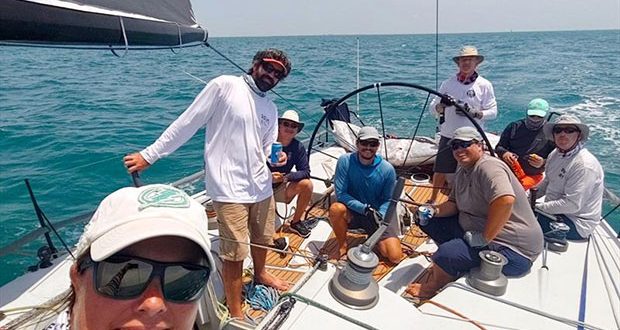 For Mike Kayusa’s Farr 40 ‘Pendragon’ getting to the new wind outside of Tampa Bay proved to be the key to victory in the inaugural North Gulf Challenge ocean race. With the wind dying just outside of the Sunshine Bridge on Friday afternoon, the best choice was to head west, even a little southwest, sailing as fast as possible covering the shortest distance across the parking lot to reach the new wind.

Chip Merlin’s famous Bill Lee ULDB ‘Merlin’ did take line honors in Pensacola, setting a high bar for the next North Gulf Challenge. Hitting speeds in the high 20’s and sailing steady 13’s after the early light air, ‘Merlin’ surfed back toward the rhumb line and finished in the Florida sunshine, arriving at the Pensacola Sea Buoy at 4:09pm EDT— 3:09 CDT local time— Saturday.

Near the Sea Buoy, Pensacola YC Fleet Captain Andrew McMillan and his ‘brave’ crew were riding the waves in a 24-foot center console with several jugs of the yacht club’s famous Bushwhackers, a tasty reward for 70-foot yacht’s big crew of 11 guys and one lady to enjoy on their ride up the Pensacola Ship Channel and into Pensacola Bay.

Even spending a few hours on Friday afternoon sneaking along at about 4kts to get to the new, strong southerly breeze further offshore, the new race’s elapsed time set by ‘Merlin’ will be a tough course record to beat. 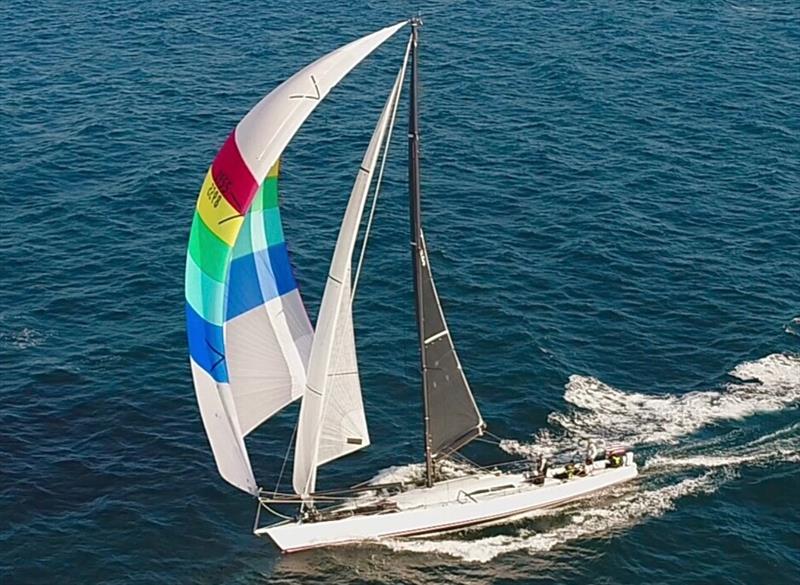 Kayusa and his crew were spreading sails on the Pensacola Yacht Club lawn early Sunday morning. When asked how the race was for ‘Pendragon’ Mike said, “Wet!”

“It was like a fire hose. We were hitting 20 plus at times and doing steady 13’s. It was a great race for ‘Pendragon’ but there is nothing dry on the boat at all.”

The last boat to finish was George Norwood’s Island Packet 40 ‘Flagship’ with a corrected time of 2d 17h 06m 57s.

Like ‘XTC’, Norwood and his crew faced a cold front, a wind shift from South to North and had a tough beat up to Pensacola. Even though they finished early Tuesday at 12:18:31AM, the Pensacola YC race team met them at the dock after they had come in from the Sea Buoy some five miles out two hours after their finish.

Norwood said that arriving at the club around 2:30AM he had hoped to see someone at the dock to catch his lines. But to his surprise, Pensacola Yacht Club’s Commodore Tom Pace, Jr and fleet Captain Andrew MacMillan and some of the racers from St. Petersburg greeted the crew with a full-on welcoming party with cold champagne and Bushwhackers.

After the ceremony Pace said, “Every bit of the comments about the new race and Pensacola Yacht Club were positive. Skippers and crews are already planning for the next race. It may be from Pensacola to St. Pete or it may be from St. Pete to Pensacola again. We will have a debrief and make our plans soon, so skippers and crews have plenty of time to get ready to race again”