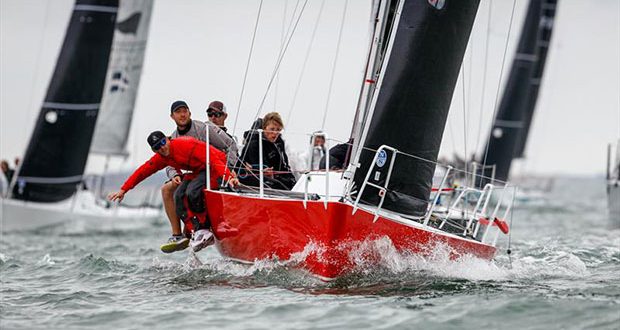 For the 17 strong fleet which started competition today on the Solent for the Quarter Ton Cup, the waiting was worth it as different boats won each of the three light winds races contested around short, sharp windward-leeward courses off Hillhead.

Just like the rest of the sailboat racing world the crews of these historic, tweaky, pocket sized IOR derived race boats had to have a year off in 2020, fifteen years after the class was rekindled in Cowes and the Quarter Ton Cup was dusted down and polished up as the reward for this pinnacle event.

The reward today was in the depth and quality of the competition. The sun on the Solent may have been absent and the cool northerly breeze threatened to drop out at times, but the racing was as close as ever and the results were decided by seconds gained and lost here and there. 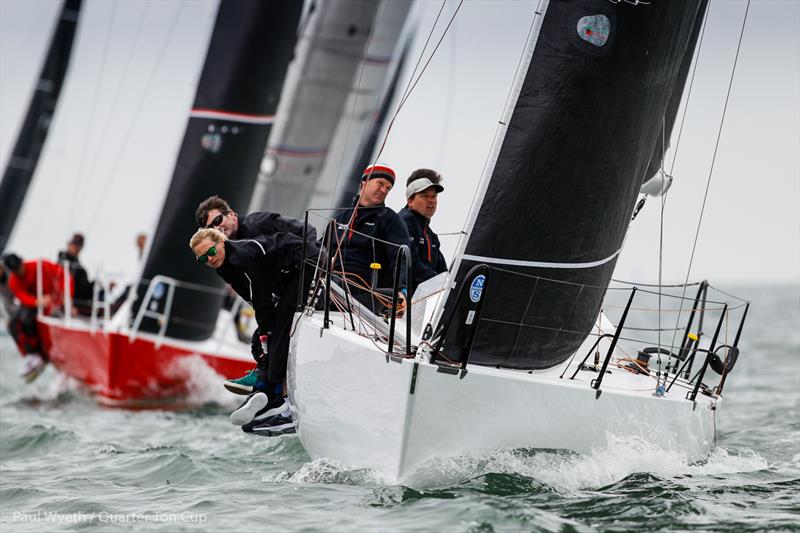 Leaders after Day 1 are Kieran Hayward and the comparatively young crew on Blackfun a Laurie Davidson late 1970s design which was restored in her native New Zealand before being brought to England to race. They top the Quarter Ton Cup leaderboard on eight points, three ahead of Cowes’ three times overall winner Louise Morton on Bullet. Defending champions Protis, sailed by Ian Southworth and Team Hamble, lie third, a single point behind Morton.

Kieran Hayward, who alternates regattas on the boat with his father Tony, finished runner up in 2018 behind Sam Laidlaw. But while both father and son have taken second overall during their ten plus years campaigning for the Quarter Ton Cup the win has eluded them.

“Maybe this will be the year…” smiled the quietly contented Hayward back on the dock after posting a second, first and fifth for the day. 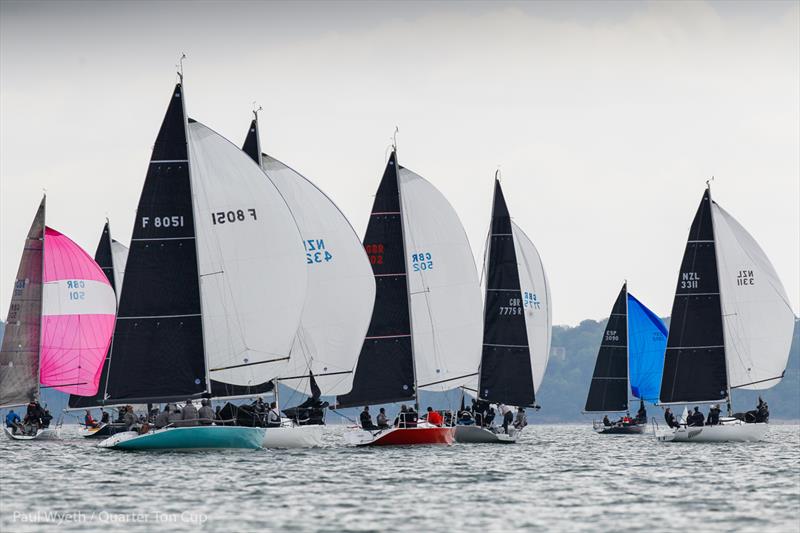 If indeed Blackfun were to win overall then it might yet be their spectacular recovery in the third contest, from seventeenth – last – at the first top mark to round the second windward mark in fourth – that proves as valuable as firsts and second. Recovering so many places is no mean task in this fleet.

“We screwed up the start and went the wrong way up the first beat and then ended up very, very, very overstood coming to the first mark. We went hard left on the second beat and that kept us in it and we caught two boats on the last downwind.” Reported the helm Hayward, “We seem to be going quite well in the light winds today which is good on a boat which historically has been better in a breeze, so that is good.”

He recalls, “Between my dad and I we have done every Quarter Ton Cup since we got the boat in 2011 and both of us have finished second. It would be nice to win it once, to finally do it. And if the breeze stays light we might have a chance but it if gets windier other boats might do better.” 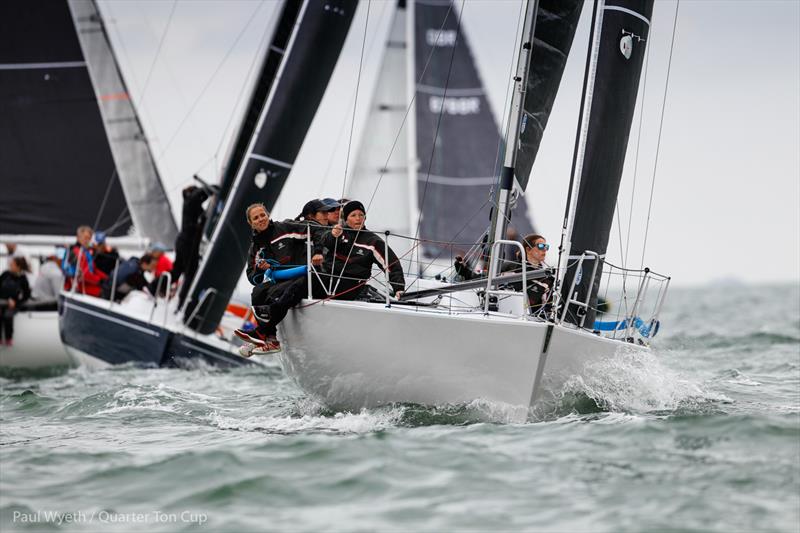 Louise Morton and the crew of Bullet made their best possible start when they appeared to run away with the first race win. After finding themselves deep on the first round of Race 2 they had recovered to fourth on the second beat but lost two boats on a fickle final run. Bullet took sixth in the third race.

Louise Morton three times an overall winner of the title said, “It was such a great day of racing. We have all missed it so much. There were so many position changes. Race 2 I think we were tenth on the first round and hauled ourselves back so it is fun.

The left side of the course was good early but it was then hard to get to the right side of the course. I am happy with our day. If someone this morning had offered me second overall at the end of the first day I would have taken it gladly. It is such a really good class and the thing is all these boats have different conditions and so tomorrow we could easily see another three different winners.” 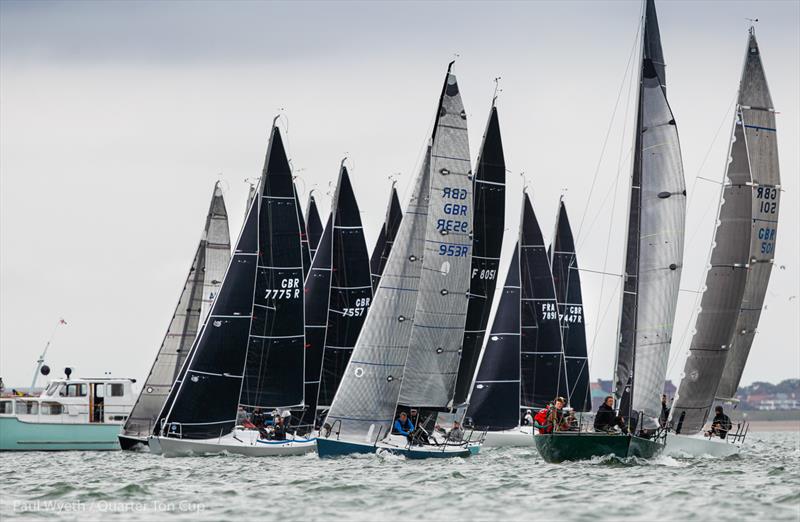 Morton’s all girl crew on Bullet wear socks carrying the knitted reminder that ‘every second counts’. That proved true once again on the last race when Peter Morton won by a single second after a spirited light wind duel with defending champions Protis down the last run of the day. As much as anything it was pleasing endorsement for the Quarter Ton guru Morton whose first day of racing this was on the Gonzalez designed Spanish boat Cote which he has been updating.

“It took us a couple of races to get set up but we have some good speed downwind.” Noted Morton. Cote was built for the 1990 Quarter Ton Cup in Bayona where it finished runner up and it also won the revived Quarter Ton Cup eight years ago on the Solent. 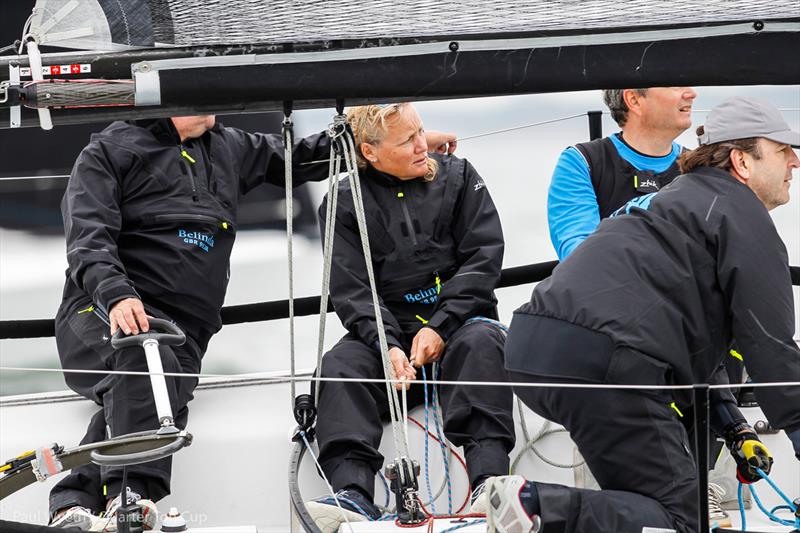 “It is amazing racing.” Morton enthuses, “If you think of and look at the different ages of the boats, the different shapes and sizes of the boats and it is still all down to seconds here and there. This is closer than most one design fleets. And the thing is it is down to setting the boats up. They are very tweaky boats and always have been. Get it right and you are quick, get it wrong they can be shockingly slow.”