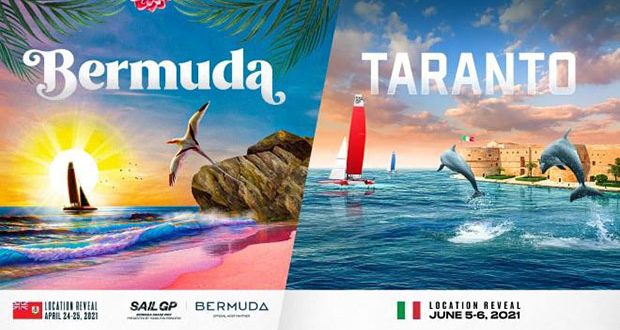 SailGP today announced an updated schedule for the first half of its second season, with the opening events now set for the island of Bermuda and the southern Italian city of Taranto.

On April 24-25, 2021, the Bermuda Grand Prix presented by Hamilton Princess will set the stage for an expanded season that is planned to feature nine events. Following the opener, the first-ever Italy Grand Prix will be held June 5-6 in Taranto.

Though San Francisco and New York were initially set to host the first events following SailGP’s Season 2 postponement due to COVID-19, the league shifted the schedule to ensure greater certainty and reduce travel in the early part of the year. The United States Grand Prix | San Francisco will now serve as the SailGP Season 2 Grand Final, and is planned to take place in April 2022.

Just over 1,000 km/640 miles off the East Coast of the U.S., Bermuda is not only the ultimate island destination, but has been largely shielded from the pandemic. Due to its successful health and safety measures, Bermuda is an ideal venue to restart SailGP’s global racing championship and host pre-season training.

Following the league’s restart in Bermuda, SailGP will shift to Europe – where four of its eight national teams are based – for a series of five grand prix events beginning in Taranto. Italy has long been one of the top sailing destinations in the world, and the southern coastal city will welcome the world’s best sailors for the first time.

As previously announced, the Great Britain Grand Prix | Plymouth will then take place on July 17-18, followed by the ROCKWOOL Denmark Grand Prix | Aarhus on August 20-21. Two additional European host cities will be announced with the remaining season schedule in early December.

SailGP CEO Sir Russell Coutts said: “After our successful opening season in 2019, cities have taken notice of SailGP, recognizing the economic potential and international exposure that comes with hosting our global events, as well as the community impact of our Race for the Future purpose-driven agenda. We’re incredibly pleased that our venue partner portfolio has expanded to include events in Bermuda and Italy. Both venues should provide excellent conditions for our high speed, close-to-shore racing. This new schedule allows us to plan our first events of 2021 with more confidence while still retaining a U.S. event at the end of the season.”

The Bermuda Tourism Authority will serve as Official Host Partner of the league’s first-ever Bermudian event and, through SailGP, will highlight Bermuda as a world-class destination for leisure and business travel and tourism investment.

The Hamilton Princess & Beach Club will serve as Title Partner for the kick-off event. A Fairmont-managed hotel, the Hamilton Princess is Bermuda’s most known and iconic hotel situated on the edge of Hamilton Harbour. The West End Development Corporation (WEDCO) is the Official Venue Partner of the Bermuda Grand Prix presented by Hamilton Princess, while the event has the support of three additional partners: insurance firm BF&M, global reinsurer RenaissanceRe and leading independent offshore bank and trust company Butterfield Group.

SailGP will also work closely with Bermuda on the common goal of diverse and meaningful social impact with clear engagement points across the community, including through SailGP Inspire.

As an island territory, Bermuda’s sailing legacy is integral to its 400-year-old history; the seafaring nation invented the iconic Bermuda Rig, which is still used in sailing yachts today. Bermuda played host to the 35th America’s Cup in 2017, providing a spectacular playing field for the competition that first featured the foiling catamarans that evolved into the F50 used for SailGP.

Glenn Jones, interim CEO of the Bermuda Tourism Authority said: “Bermuda is open, safe and welcoming travelers in search of a truly extraordinary experience. A getaway to Bermuda delivers warm weather, cultural exploration and exciting sporting events year-round. Bermuda is incredibly proud to have been selected to host the prestigious 2021 season-opening event for SailGP, which is rapidly emerging as the pinnacle league in professional sailing. The island’s tremendous sailing legacy, cultural diversity and global proximity will be on full display. The spring event will play a vital role in our tourism recovery; it’s also an ideal season for superyachts to come and charter here, enjoying spectacular scenery with a front-row seat to this dynamic on-the-water event. Last month, the island hosted the 70th Bermuda Gold Cup and 2020 Open Match Racing World Championship, along with golf’s Bermuda Championship that became the first PGA TOUR event to welcome live spectators since March.”

Taranto in Southern Italy will host the first-ever Italy Grand Prix and will be the second stop of SailGP Season 2. The ‘City of Two Seas’ is situated between two bodies of water – the Big Sea and Little Sea – and the unique natural harbor will provide the perfect setting for the adrenaline-filled racing, in front of a backdrop that marries the old and new of Southern Italy.

SailGP will join the list of international sporting events hosted by Taranto. Most recently, in October 2020, Taranto was a stop on the prestigious Giro d’Italia – one of cycling’s three Grand Tours – and in 2026, will welcome 26 countries to compete in the XX Mediterranean Games.

Taranto Mayor Rinaldo Melucci said: “With 28 centuries of history at the heart of the Mediterranean, Taranto is proud to host teams and guests from all over the world for SailGP in 2021. This will be the competition’s first stop in Europe, at the start of our legendary Italian summer. Founded as a Spartan colony, the city is emblematic of the Italian art of living well and home to one of southern Europe’s largest ports. Its waters will also become the venue for various contests in the XX Mediterranean Games. Today, Taranto is at the forefront of the Italian green new deal, and undergoing a major transition in terms of innovation and resilience. Many people might not be familiar with this corner of Italy, but Taranto’s wonderful light, flavors and beauty are something that you will cherish forever. You are all very welcome.”

Prior to the season start, SailGP’s eight national teams – Australia, Denmark, France, Great Britain, Japan, New Zealand, Spain and the United States – will use the stunning blue waters of Bermuda’s Great Sound to hone their skills during a pre-season training camp. And, for the first time, female athletes will be included in the training as part of SailGP’s gender equity initiative.

In its inaugural season, SailGP attracted a global broadcast audience exceeding 256 million and an average economic impact of US$23 million per venue, boosting local hotels, restaurants and businesses.

Find out more at www.sailgp.com