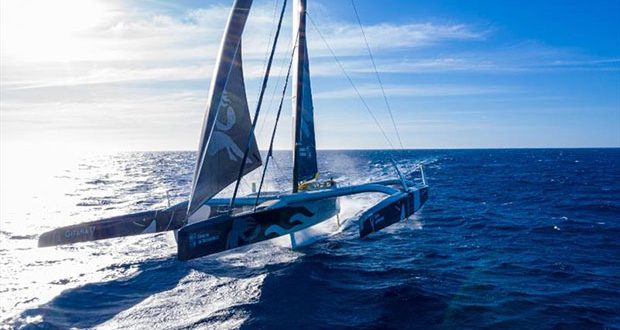 With 10 days to go till the Maxi Edmond de Rothschild is relaunched, the five-arrow racing stable is unveiling its sports programme for 2021.

It had already been announced that Franck Cammas, Charles Caudrelier and their crew would be defending their title in the Rolex Fastnet Race in early August before lining up in double-handed configuration on the start line of the Transat Jacques Vabre in early November.

What is new is the plan to set sail on another round the world record attempt, which Gitana Team hopes to finish off the year with. As a result, three major events will punctuate the programme drawn up for Gitana Team and the men on the 32-metre flying giant.

With crewed and double-handed sailing, not to mention a few singlehanded sessions for Charles Caudrelier to plan ahead for the Route du Rhum Destination Guadeloupe 2022, the coming months promise to be rather active for the men of the racing stable founded by Ariane and Benjamin de Rothschild.

“We’re lucky to be in a position to make the most of a dense and varied programme with three major events and a series of fine challenges awaiting us throughout the season. Ultimately, the refit didn’t take too long – a little over three months – and now we’re eager to get back out on the water. We’re not wasting any time, it’s full-on and fortunately so!” said a delighted Franck Cammas. “In addition to the races, the other excellent news is the arrival of some new competitors to flesh out the line-up and ensure it is of supreme quality.” Indeed, with the recent launch of the new Banque Populaire XI and a new partner being announced for François Gabart and his team, who will now be flying the flag of the Kresk group, the future looks bright for the fleet of large blue-water trimarans.

For Cyril Dardashti, director of the Gitana Team, setting sail on the Jules Verne again was an obvious move, despite the tight schedule the team will have to work around: “It’s certainly a dense and ambitious programme, but I believe that the experience gleaned aboard by our skippers and their crew, and the expertise demonstrated by the shore team in preparing the Maxi Edmond de Rothschild is prompting us to be bold. The idea of setting sail again this year was mooted immediately, just hours after we turned back. We’re keen to hunt down the Trophy and you have to walk the talk. You have to take the races as they come and keep a cool head as this sport of ours is offshore racing and all the ups and downs associated with that. Once again, we’re extraordinarily lucky to be able to excel ourselves thanks to the unfailing and constantly renewed support of our boat’s owner Ariane de Rothschild, and the Edmond de Rothschild Group. The best way to thank them is to keep performing well out on the water.” 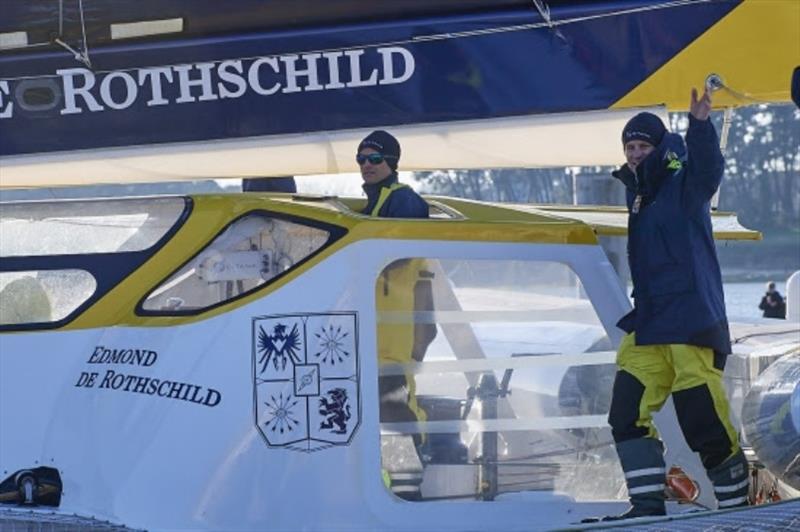 The skippers of the Maxi Edmond de Rothschild give us the low-down on the three majors meetings, set to colour Gitana Team’s season and explain their decisions.

Open to multiple classes, this legendary race, which is contested every two years with the race start in Cowes (Isle of Wight), is an event that sailors are always eager to pay tribute to. This is especially true when it involves defending your title, as will be the case for Franck Cammas, Charles Caudrelier and their four crew. In 2019, on one of their very first official outings at the helm of the five-arrow giant, the duo on Edmond de Rothschild had the bit between their teeth right to the wire, snatching victory and the event record from François Gabart and his men by just 59 seconds. This stellar finish marked the duo’s arrival within Gitana Team in impressive style.

“The format of the Rolex Fastnet Race is the perfect way to kick off the season. We will be in a typical Jules Verne Trophy configuration so there will be six of us and it’ll be a very good opportunity to train and get up and running again with the group, which will make a fresh round the world attempt at the end of the year. With a finish in French waters in Cherbourg for the very first time, there is an extension to the course and with it a notable cross-Channel passage that’s sure to fuel our competitive spirit. There’s no better test than that when you’re racing!” enthused Charles Caudrelier. 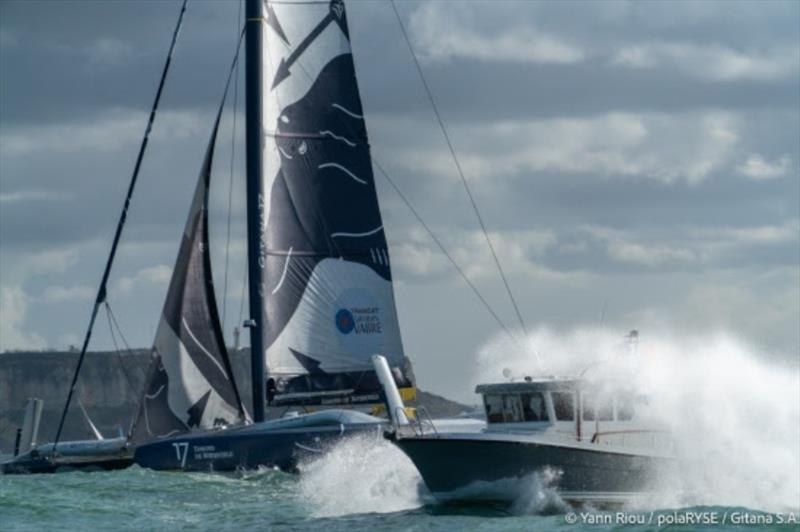 From 28 October, the Maxi Edmond de Rothschild will be back in the Eure basin and the festivities synonymous with the pre-race progamme for the Transat Jacques Vabre. Four years ago, the Coffee Route was the giant’s inaugural race and her first transatlantic flight. Since then, the maxi-multihull has covered over 100,000 nautical miles and has added a number of fine accolades to her track record. Old hands at the Norman event, between them Franck Cammas and Charles Caudrelier have racked up five victories in the competition; 2001, 2003 and 2007 for Franck in a multihull and 2009 and 2013 for Charles in a monohull and then a multihull! Set to follow a unique 7,500-mile course bound for Martinique via the Trindade and Martin Vaz archipelago offshore of Rio de Janeiro, the Edmond de Rothschild duo has every intention of showing off Gitana 17’s true potential once more.

“It’s an event Franck and I really like and we’re very happy at the prospect of hooking back up with our rivals out on the racetrack. Around 2/3 of the course proposed conjures up an image of a traditional Jacques Vabre and our descent of the Atlantic in the Jules Verne Trophy, but the last section with the climb up to the Caribbean and the finish in Martinique is unprecedented. The format is longer, the routing alluding to 14 days at sea, but it’s particularly well suited to our large flying trimarans. The new boats launched this year – Banque Populaire and the trimaran SVR Lazartigue – will be there, which is extremely motivating. That equates to five Ultimes on the start line, which hasn’t been the case since the last Route du Rhum. On paper, the new boats inevitably have real potential, but they are young and there’s an element of the unknown with regards to whether they are in a position to quickly iron out any teething difficulties. I think we have a very good card up our sleeve as our duo is tried and tested, the Maxi Edmond de Rothschild is maturing nicely and the course suits us to a T. One thing for sure, it’s going to be a battle royal and it’ll be thrilling both on the water and on land,” announces Charles Caudrelier.

“The Transat Jacques Vabre has become a major course on the oceanic event schedule, in the same way as a Route du Rhum or a Vendée Globe. It’s a very positive thing that the Ultimes are back on start line,” added the sailor from Aix-en-Provence. 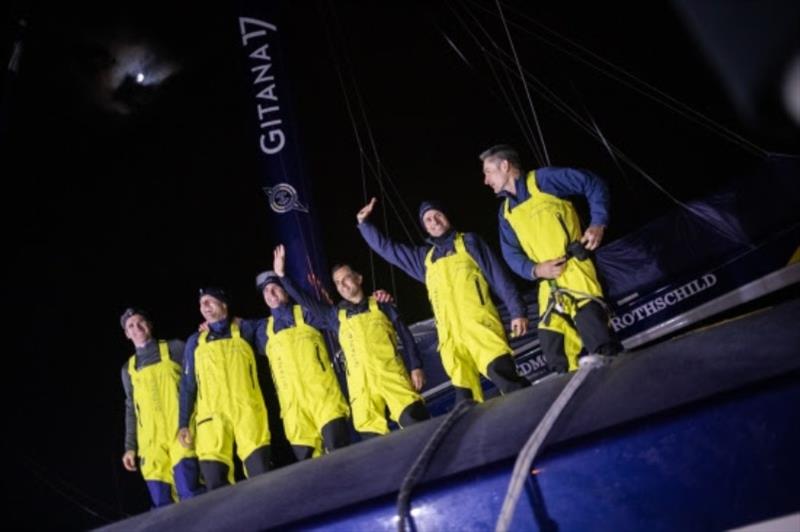 After two fruitless attempts last year, the men on the Maxi Edmond de Rothschild will set out again in the quest for the outright round the world speed record under sail. This Jules Verne Trophy, in the hands of Francis Joyon and the men of Idec Sport since 2017 with a time of 40 days 23 hours and 30 minutes is just as much a holy grail as the desire to be the first crew to secure a highly symbolic sub-40-day time.

Forced to turn back at the gateway to the Southern Ocean after breaking the rudder on their starboard float, Franck Cammas, Charles Caudrelier and their four crew had enjoyed a very promising start to the course, bagging the fastest ever time to the tip of South Africa by devouring the Atlantic in 11 days 14 hours and 3 minutes. The adventure came to an abrupt halt and this feeling of incompletion is prompting the five-arrow team to set sail again at the end of the year!

“We knew when we began the record campaign… It’s a quest which requires your attention for the long haul and the statistics for success in the Jules Verne Trophy speak for themselves. The weather is key and there’s only one opportunity a year to have a crack at the record in the best possible conditions and that’s wintertime! At the start of the year, when we had to turn back at the gateway to the Southern Ocean, there was inevitably a great deal of disappointment aboard, but primarily there was a sense of frustration as the first part of our course demonstrated that we were poised to do well and that the incredible record set by Idec was within our reach… It’s really great to be able to return to the fray so soon”, said a thrilled Charles Caudrelier.

“The programme we’re presenting is an ambitious one, especially the last element linking the Transat Jacques Vabre and the Jules Verne Trophy, which will inevitably be dependent on any technical complications we might encounter in the former. It’s ambitious but we believe that it’s better to be overly ambitious than not ambitious enough so it’s a very positive step forward to be able to put everything in place to make it happen. Indeed, behind a new Jules Verne Trophy attempt, there is a massive amount of work that has to go on, as much in terms of the technical preparation of the boat as the overall logistics required for a 40-day circumnavigation of the globe with a crew of six. Our stand-by period will be short, but that’s a good thing as it’s never easy when the waiting on land drags on”, concluded Franck Cammas.

Weather conditions permitting, the Maxi Edmond de Rothschild will be relaunched on 7 June 2021.